Is Franklin Barreto hitting well enough for a callup to Oakland A’s? 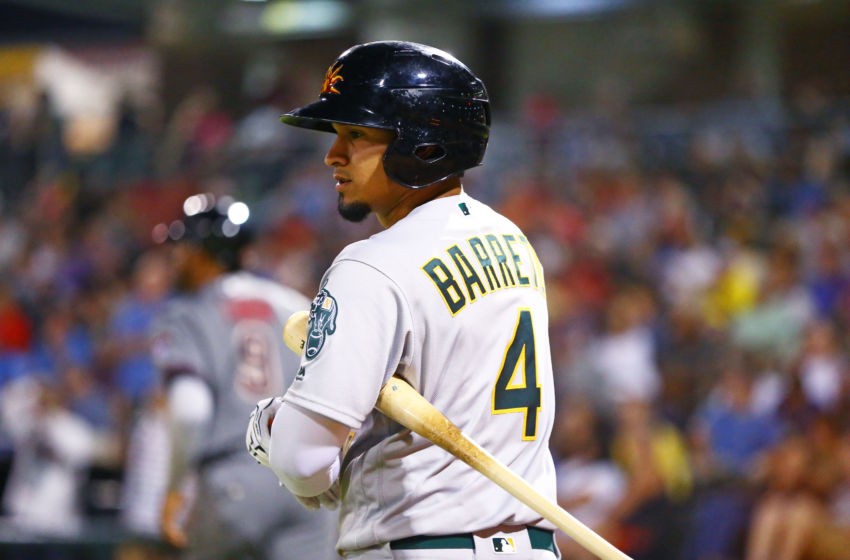 The Oakland A’s youth movement is beginning to reach full swing, but there are still a few top prospects waiting in Triple-A. The cream of the crop is shortstop Franklin Barreto, the very best youngster in the team’s entire minor league system.

We’ve followed the 21-year-old’s performance throughout the year, and it can be summed up as such: He’s alternated between hot and cold stretches, but the one consistent factor is that he’s been striking out too much for a hitter who relies more on making contact than any other skill. There was still work to do before a callup to the bigs.

He’s hitting .351 over that stretch, but ignore that for now; it’s partly the BABIP talking, and they’ve all been singles. I’m more interested in the fact that he’s struck out only nine times in 43 plate appearances, a rate of 20.9% that is an encouraging step forward from having a K% in the 30s.

There are caveats — it’s only a handful of games, it’s only a solid improvement rather than a dramatic one, and his power has disappeared over the same span. The message here isn’t that he’s figured it all out and he’s ready to beast all over everyone. But it’s positive progress.

Why bring this up now, when the answer is so anticlimactic? Because of this.

If Pinder has to go on the DL, as seems likely, I would not be surprised at all to see Franklin Barreto here sometime this weekend.

Chad Pinder, another rookie and one who has already been playing well in Oakland, pulled a hammy on Friday and might miss some time. The door is suddenly unlocked, if the A’s would like to open it for their top prospect. Slusser isn’t saying definitely, but the fact that she’s even raising the idea is meaningful.

One complicating factor: Marcus Semien, the incumbent starter at SS who is currently out after wrist surgery, began his injury rehab assignment on Friday in the minor leagues. Granted, it will be a relatively long rehab — Joe Stiglich of NBCS suggests at least two weeks — but the point is that Semien should be back in the foreseeable future. On the other hand, by that time we’ll be into July and second baseman Jed Lowrie could potentially be traded at any moment, which would open up another spot for the remaining middle infielders.

Now there are two questions to answer: Is Barreto ready for a debut, and will he have an everyday job available for more than a couple weeks if he comes up now? The answer to both seems to be a resounding “maybe.” I don’t have a hot take opinion on this one, just laying out the facts for you.

It’s no secret that I’m all in on this youth movement, so if the A’s think it’s time to give Barreto his first MLB trial then let’s grip it and rip it. But from where I’m sitting, it doesn’t have to happen yet. Still got Joey Wendle down there too, with Lowrie and Adam Rosales available to cover SS in the short-term.