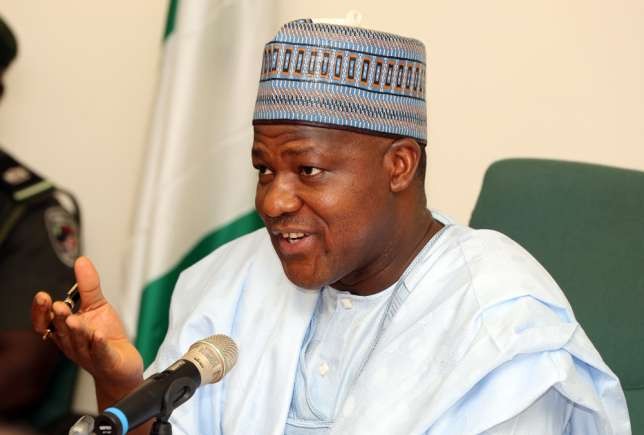 Dogara said this when he received the new Secretary to the Government of the Federation (SGF), Boss Mustapha in his office.

The Speaker, House of Representatives, Mr Yakubu Dogara, has said that contrary to beliefs in some quarters, the Legislature and the Executive were not rivals but partners in progress.

Dogara said this when he received the new Secretary to the Government of the Federation (SGF), Mr Boss Mustapha, in his office on Monday in Abuja.

He described the appointment of Mr Mustapha as “a round peg in a round hole, or a square peg in a square hole”, stating that the president “hit the nail on the head”.

Dogara said that the visit to the National Assembly by the new SGF was unprecedented in the history of the parliament, saying, “it has never been done.”

“In those days it was invitations extended to them, then a discussion whether they’ll appear at all would ensue.

“In some cases, some members of the Executive would go to court on the basis of legislative summons.”

According to him, that is because powers of every sort usually led to abuses. So the rule that people always use to guard was that: “power corrupts, and absolute power corrupts absolutely.”

“That is why we have the three Departments of Government, The Legislature, The Executive and the Judiciary, all of us doing the work of democracy.

“So, it was an idea of the founding fathers of democracy that it would take some kind of cooperation and consensus among the different Arms of Government for us to make progress as a people.

“We want to reassure you of our desire to work with the Executive in order to see that we deliver the goods for the people.

“As a matter of fact, for us, there is really is no distinction in government, it’s just ignorant people who tend to make these distinctions.

“If the Executive fails, there’s no way the Legislature would be exonerated, we are all guilty,” he said.

Earlier, the SGF recalled the role played by Dogara in the process that led to the victory of the All Progressives Congress in the 2015 General elections.

“Let me single out not for any reason, the Speaker. I remember when this whole enterprise started, we were asked to serve in the national convention committee with you.

“You were the nominee of the House of Reps in that committee and we worked for months to put up a convention and a selection process that was adjudged to be the best ever in this country.

“You worked with us in spite of your numerous schedules in the National Assembly and what eventually happened in Lagos was a product of your input, commitment and dedication that you had put into the enterprise.

ALSO READ: It will be suicidal to threaten Saraki and Dogara – Osinbajo

“So you were part of the process through which President Muhammadu Buhari emerged as our candidate in December of 2014.

“We went around this country with most of you, campaigning to ensure that we win elections and it behoves on us to ensure that in the implementation of government policies, that we take steps that will provide for the wellbeing of our people.”

Mustapha also thanked the leadership of the House of Representatives for standing with the government of President Muhammadu Buhari.

“I bring you the warm greetings of the President of the Federal Republic of Nigeria and to also extend his thanks to your leadership in the House of Representatives for the level of progress that has been achieved thus far in the area of the primary responsibility.”

Mustapha maintained that the National Assembly was not competing with the executives, but they are “joint owners of this enterprise”.