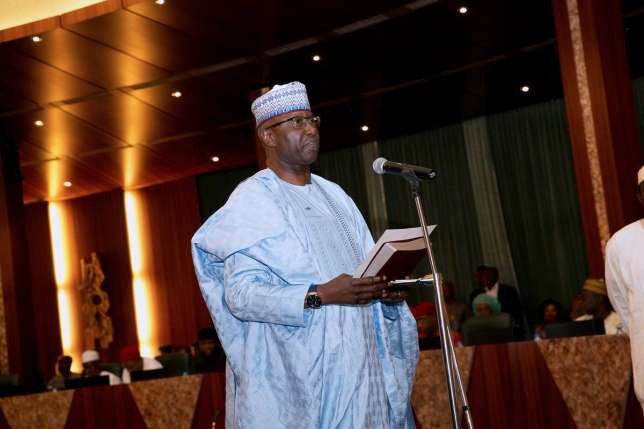 He asked to not be addressed with ‘Your Excellency’ because it’s not in the constitution.

The new Secretary to the Government of the Federation (SGF), Boss Mustapha, has requested to not be addressed with the title ‘Your Excellency’ because it is unconstitutional.

President Muhammadu Buhari swore him in as the new SGF before the commencement of the weekly Federal Executive Council (FEC) meeting on Wednesday, November 1, 2017.

play President Muhammadu Buhari shakes hands with Secretary to the Government of the Federation (SGF), Boss Mustapha after his inauguration on Wednesday (Bayo Omoboriowo)

After receiving hand over documents from the outgoing Acting SGF, Dr Habiba Lawal later on Wednesday, he asked to not be addressed with the prefix ‘Your Excellency’ in any capacity.

He said, “I will make a passionate appeal. I don’t know where you people get this ‘Your Excellency’ from. Some of the nomenclatures are banana peels.

“I often hear people say ‘Executive Governor’, I say look at the constitution, there is nothing like executive governor. It is Governor of a state.

“I want to simply be addressed as SGF please. I don’t claim any superior experience or skills other than the grace of God.”

Mustapha also promised to ensure the success of President Buhari’s administration in all its policy implementation.

He said, “The Office of the Secretary to the Government of the Federation (OSGF) is the engine room of government and we can’t shy away from our responsibilities. We have the responsibility to ensure that this government succeeds and if it doesn’t succeed it means we have not done our job.

“We are supposed to energise the policies of President Muhammadu Buhari so that the yearnings of citizens to live a better life will be achieved.

“I assure you that under my administration we are going to analyse our weaknesses and strengths and most importantly recover lost grounds.”

ALSO READ: 10 things you should know about new SGF Mustapha

The former Managing Director of the National Inland Waterways Authority (NIWA) was appointed by the president on Monday, October 30, to replace Babachir Lawal who was sacked by the presidency due to his involvement in a corruption scandal that resulted in his suspension in April.