After the hugs and kisses, Macron rips Trumpism 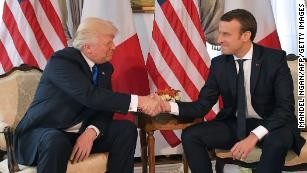 After the hugs and kisses, Macron rips Trumpism

France’s President Emmanuel Macron and Donald Trump skipped through Tuesday kissing, hugging, holding hands and rubbing each others’ shoulders.
On Wednesday, before a joint session of of Congress, the charismatic French leader turned around and repudiated the US President’s political philosophy and worldview.
The startling contrast between Macron palling around with Trump on a state visit and his velvet hammer speech — effectively defending the world order from “America First” nationalism — encapsulated his intricate US strategy. 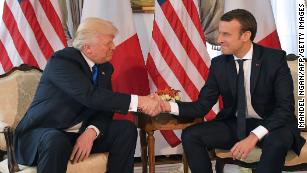 Trump signals possible breakthrough on Iran deal as US, Europe continue talks
Macron wants to bind the Trump administration into the existing Western international system, to convince it to dive back into multilateral efforts to shut down Iran’s nuclear program, to battle climate change and to safeguard globalization and free trade.
And he wants to position France as the main conduit between America and the European Union, a process helped by the deterioration in German Chancellor Angela Merkel’s political position and Britain’s pending withdrawal from the EU.
But Macron can’t achieve any of those goals without bringing along Trump himself, and effectively convincing the US leader to compromise on positions he feels with visceral and genuine intensity or at least to keep him from damaging a global system he often deplores.
That’s why he is developing an unusually touchy-feely relationship with Trump — which he compared to the kissing, hugging and hand-shaking that went on between US founding father Benjamin Franklin and the French philosopher Voltaire.
“It can remind you something,” he quipped in the House of Representatives.

Contradiction at heart of Macron/Trump relationship

The contradiction between Macron’s own philosophy and his charm offensive with Trump was laced through a speech punctuated by multiple standing ovations and cheers.
Given the theatrics, Macron’s decision to address Congress in accented but fluent English and the policies he was advocating, the compelling political moment looked for all the world like a State of the Union address by a Democratic president.
To begin with, Macron paid tribute to common sacrifices and values shared between the United States and its oldest ally, through two world wars to today’s common struggles against terrorism at home and in places like Syria. 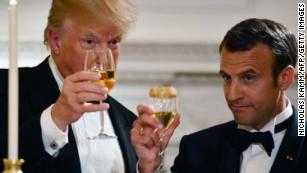 ‘They love themselves:’ Why France hasn’t been swayed by Le Bromance
But then he took a barely concealed swipe at the ideological grounding of Trump’s populist nationalist philosophy, that is mirrored in anti-establishment political movements across Europe.
“We can choose isolationism, withdrawal and nationalism. This is an option. It can be tempting to us as a temporary remedy to our fears,” Macron said.
“But closing the door to the world will not stop the evolution of the world. It will not douse, but inflame the fears of our citizens.”
He said no one should take transatlantic ties or common values for granted, warning that the liberal internationalism was under siege, raising the need for a new 21st Century world order based on fundamental values, the rule of law and human rights.
“Other powers with the strongest strategy and ambition will then fill the void we would leave empty. Other powers will not hesitate once again to advocate their own model to shape the 21st century world order.
“Personally, if you ask me, I do not share the fascination for new strong powers, the abandonment of freedom and the illusion of nationalism.” 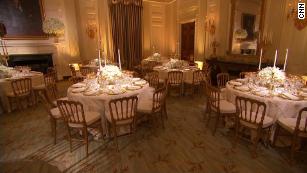 Tim Cook, Rupert Murdoch headline Trump’s 1st state dinner guest list
His comment struck a contrast to Trump’s frequent praise for strongman leaders like Russian President Vladimir Putin and China’s President Xi Jinping.
Macron called on the United States to embrace a return to multilateralism — a creed most post-war US presidents have pursued, but which Trump has derided by pulling out of the Paris climate deal and criticizing global trade pacts, while arguing the rest of the world is ripping America off.
He argued that the global system that America had invented, and sacrificed for during World War II and subsequently was at a critical moment, and warned against isolationism, withdrawal and nationalism.
“This requires more than ever the United States involvement as your role was decisive for creating and safeguarding this free world,” Macron said.
“The United States is the one who invented this multilateralism. You are the one who has to help now to preserve and reinvent it.”
Macron explained that he and Trump had agreed to seek a new deal on Iran’s nuclear program to counter the perceived threat from Tehran’s missile program, regional influence and eventual nuclear activity when the current deal expires.
But he warned that the United States and France should also honor the existing pact, agreed under the Obama administration as Trump considers whether to follow through on his vow to walk out on a deal he described Tuesday as “insane.”
“We signed it, both the United States and France. That is why we cannot say we should get rid of it like that.”
“France will not leave the JCPOA because we signed it,” Macron said.

In the kind of audacious speech that can only be given by a fresh, new leader, with confidence in his own mandate at home, Macron also jabbed Trump’s trade policies.
“We need a free and fair trade for sure,” Macron said, but added “a commercial war opposing allies is not consistent with our mission, with our history, with our current commitments for global security.”
He called for differences on trade imbalances and over capacity to be worked out through the World Trade Organization — the exact opposite approach to Trump’s threats of tariff wars.
Trump must decide by the end of the month whether to grant permanent exemptions to EU states from aluminum and steel tariffs that he has imposed in line with promises to overhaul a global trade system he says hurts Americans. 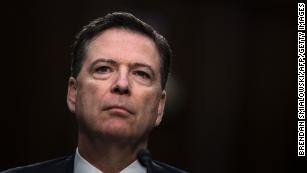 Why James Comey is not done with Donald Trump
Not for the first time, Macron borrowed the theme of Trump’s 2016 presidential campaign to beseech the US to return to the fight against global warming.
“Let us work together in order to make our planet great again and create new jobs and new opportunities while safeguarding our earth.”
“We are killing our planet. Let us face it: There is no planet B.”
Macron appeared to be gambling that his rhetorical repudiation of much of Trump’s philosophy would not filter through or anger the US President, who is more susceptible to visuals and symbolism than complicated ideological arguments. He likely made the same kind of arguments in private in the White House on Tuesday behind closed doors.
But his capacity to maintain a friendly relationship with Trump will be severely tested if the President decides, despite his entreaties, to pull the US out of the current Iran nuclear deal and to press ahead with a trade war with Europe.
In that sense, Macron’s speech could also be seen as a possible attempt to insulate himself from any future political damage back home following his stunning love fest with Trump — who is deeply unpopular in Europe — on Wednesday.
In remarks that will not be missed in London meanwhile, Macron, emerging as Europe’s most dynamic leader, said the United States and France were locked in “this special relationship” — using a term long adopted by America and Britain to define their close ties.
Share
Facebook
Twitter
WhatsApp
Pinterest
Linkedin
ReddIt
Email
Print
Tumblr
Telegram
Mix
VK
Digg
LINE
Viber
Naver
Previous article‘Adversaries’ jamming Air Force gunships in Syria, Special Ops general says
Next articlePatient dies after surgeon pauses mid-surgery to take a selfie with her breasts (photo)