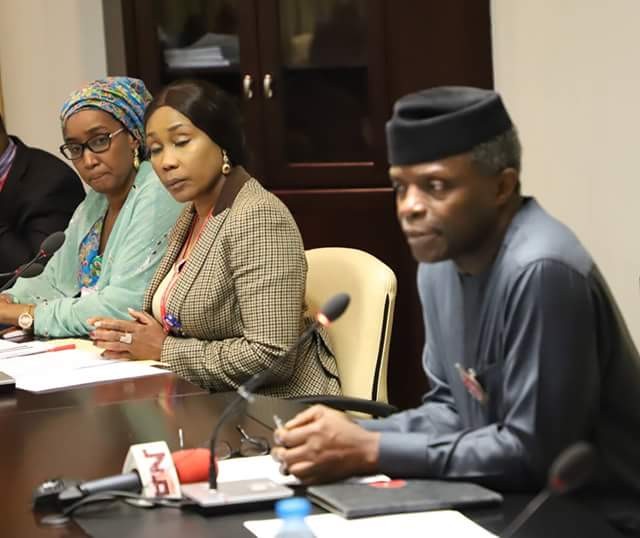 Vice President Yemi Osinbajo on Wednesday, held a meeting in Abuja to address the plight of Nigerians involved in human trafficking in Libya and other places enroute Europe.

In attendance were were the Deputy Chief of Staff to the President, Mr. Ade Ipaye; Secretary to the Government of the Federation, Mr. Boss Mustapha, the Justice Minister and Attorney general of the Federation, Abubakar Malami, The Director-General of the National Agency for Prohibition of Trafficking in Persons (NAPTIP), Dame Julie Okah-Donli, the Federal Commissioner for the National Commission For Refugees, Migrants and Internally Displaced Persons, Mrs Sadiya Umar-Farouk and the Minister of State Foreign Affairs, Hajia Khadija Bukar Abba Ibrahim.

In his opening remark, Osinbajo reiterated President Buhari’s promise at the interactive session with the Nigerian community in Abidjan, that all those stranded in Libya would be given an opportunity to return to the country.

He reiterated the commitment of Buhari’s administration to ensure that young Nigerian men and women are no longer exposed to the huge danger involved in wandering through the Sahara desert and eventual attempt to cross the sea.

Osinbajo also said it was necessary to sensitise young Nigerians with the danger involved in moves to cross the Mediterranean after being brainwashed by unscrupulous individuals.

On the CNN report that some African migrants including Nigerians are sold in Libya, Osinbajo said it was necessary to brainstorm on the matter to come up with a well prepared position on how to tackle the menace.