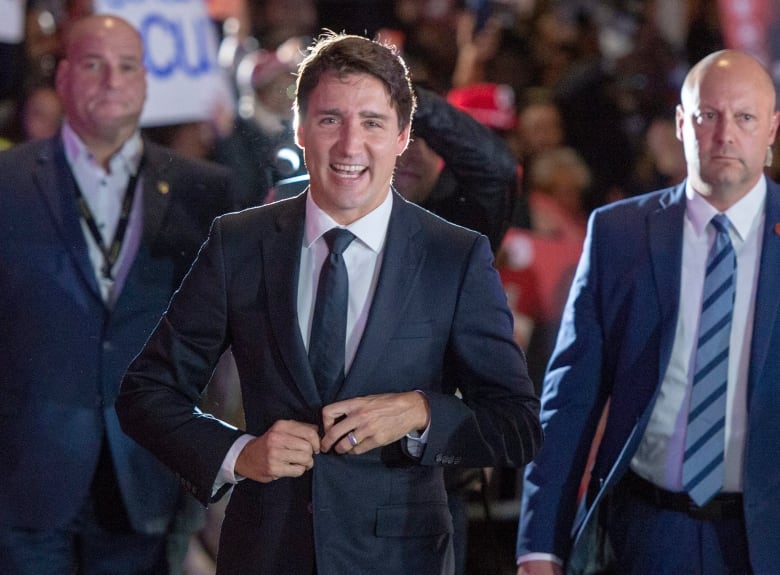 The federal leaders in tonight’s final English-language debate of the campaign will have to cut through a crowded stage with sharp-elbowed performances if they hope to stand out.

Leaders from each of the six parties that have any hope of winning a seat on Oct. 21 will be at a podium, including People’s Party of Canada Leader Maxime Bernier, who was initially left off the list by the debate commission.

There will be more leaders on the stage at the Canadian Museum of History in Gatineau, Que., tonight than at any other point in Canadian political history, including in the 1990s when the divided right fielded candidates from both the Progressive Conservative and Reform parties.

The two-hour debate will be divided into five segments, each with its own distinct theme:

All told, each leader will have less than 20 minutes of speaking time to make a personal pitch to voters, while also mounting a coherent attack on their opponents, an unenviable task.

Time will be short

There is considerably less time tonight than was allotted to each of the leaders in last week’s French debate on TVA, which had just one moderator, four participants and no questions from the viewing public.

“If the moderators don’t speak for a second — which my guess is they will, as questioners — that’s 20 minutes over two hours per leader. It’s not a lot of time, but this is their big shot,” Liberal strategist Rob Silver told CBC’s Power and Politics Sunday.

“This debate will be particularly interesting — so many leaders on the stage, so many moderators, it’s going to be confusing,” said Kory Teneycke, a Conservative strategist.

“Take off opening and closing statements, I think these leaders have about 10 minutes of airtime each, so you better be very, very, very efficient in what it is you’re trying to bring across and to get a payday clip … to push out through digital means to voters who aren’t watching the debate,” he said.

Jennifer McGuire is the editor-in-chief of CBC News and an executive with the Canadian Debate Production Partnership (CDPP), the group that is staging the event.

She said the five themes reflect the nearly 9,000 questions submitted by voters — and there will be plenty of time for the leaders to stake out their positions.

“The formats of both two-hour debates aim to provide equal speaking time for each of the six leaders and, we believe, will produce vigorous debates that will engage all Canadians,” she said.

This debate, which will begin at 7 p.m. ET, is likely to be the most watched of the campaign, as it will be widely distributed on all of the main television networks, including CBC/Radio Canada, Global and CTV but also on the Toronto Star and HuffPost Canada websites.

For some of the leaders who are not as well known among the Canadian public, like Conservative Leader Andrew Scheer and NDP Leader Jagmeet Singh, the stakes are high as the televised debates brings in an audience of casual political observers who might not have been following every twist and turn of the campaign to this point.

In 2011 — the last time a leaders debate was broadcast to so many people on this many networks — 11 million Canadians tuned in for some portion of the content, while four million of those viewers stayed around to watch the debate in its entirety.

Could be a big audience

In Canadian television terms, that’s an impressive figure. By comparison, the best-watched shows in Canada, American television imports like NCIS, Grey’s Anatomy or the Masked Singer, broadcast to a little more than a million viewers in prime time, on average.

A knockout performance, like the one former NDP leader Jack Layton delivered in 2011 when he chastised former Liberal leader Michael Ignatieff for a poor House of Commons attendance record, can move votes.

Former Progressive Conservative leader Brian Mulroney’s withering attack on former Liberal leader John Turner — “You had an option, sir” — helped deliver a massive majority for the Tories in the 1984 election.

“Anything at this point, in a race this tight, that can shake the table a bit, is very meaningful. Debates always have that potential, normally they don’t, but they have the potential to do that,” Teneycke said.

To fine-tune their debate performances, the campaigns were mostly quiet over the weekend as the leaders huddled with their teams for the final debate prep push.

Singh met Sunday in Ottawa with former NDP leader Ed Broadbent, a leader who had his own success in the 1988 debate during the “free-trade election” in which the country considered the virtues of a trade agreement with the U.S.

Broadbent courted free trade opponents and, on election day, delivered the best result for his party to that point.

Broadbent’s advice for Singh? “Be himself and repeat what he did in the French debate — he did superbly. If he can repeat that, he’ll be a winner for sure,” he said.

“I think I have to listen to Mr. Broadbent. He’s the expert here. I have to be myself and I’ll try my best. I’ll be the voice for the people — for the people who feel like they’re not being heard. I want their stories told,” Singh said.

When asked what his strategy is for the debate tonight, Liberal Leader Justin Trudeau said he’d be focused on Conservative Leader Andrew Scheer and his agenda.

Liberal Leader Justin Trudeau is asked how he is preparing for Monday’s debate and instead fires criticisms at the Conservatives. 2:31

“All debates are an opportunity to talk directly to Canadians about the choice they’re facing. Over the coming days I will be reflecting on the best way to connect these messages, these truths, to Canadians on the things that matter to them,” Trudeau said, before launching an attack on Ontario Premier Doug Ford.

Scheer said he’s “very excited” to be finally debating Trudeau in English after a couple of no-shows by the Liberal leader.

“I’m looking forward to Justin Trudeau being there, finally, for an English-language debate and obviously I’m going to hold — not only will I hold him to account for his broken promises — but I’m also going to use it as an opportunity to promote our plans,” Scheer said.

Debates have been a hallmark of Canadian elections since 1968, but what effect do they actually have on voters? Strategists will tell you they’re critical to elections and a lot of planning goes into them. Researchers, on the other hand, say there’s evidence they can change votes, though often they don’t. 8:39
Share
Facebook
Twitter
WhatsApp
Pinterest
Linkedin
ReddIt
Email
Print
Tumblr
Telegram
Mix
VK
Digg
LINE
Viber
Naver
Previous articleOntario education workers reach deal with province, averting Monday school strike
Next articleAll eyes on Canadian jobs numbers as election heads into 5th week: Don Pittis