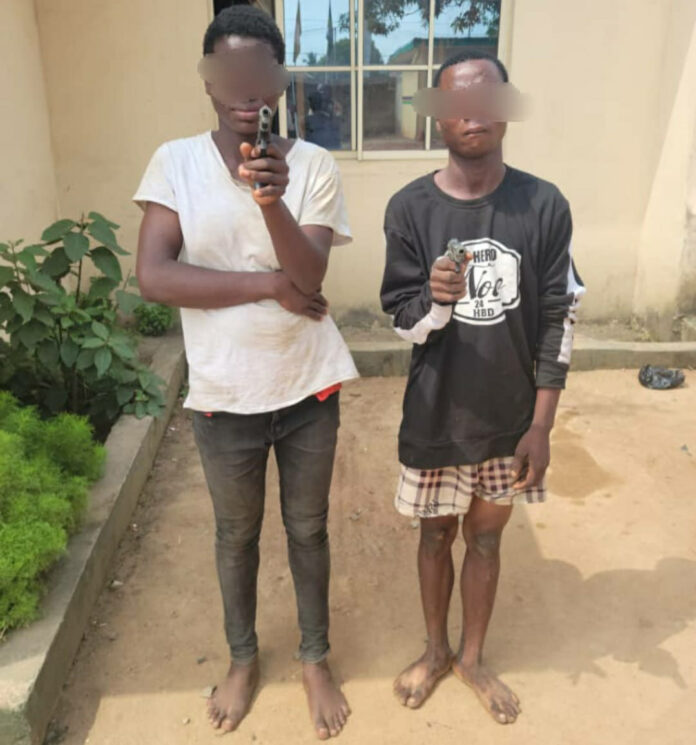 A 29-year-old lady, Chioma Okafor, was on Friday, November 25th, arrested by men of Ogun State Police Command while allegedly carrying out a robbery operation with a 19 years old man, Nweke Joshua at Adesan area of Mowe.

A statement released by SP Abimbola Oyeyemi, spokesperson of the state police command, says the suspects were arrested following a distress call received at Mowe divisional headquarters at about 9:30 pm, that armed robbers had invaded a provisional store, owned by one Johnson Nwokoro at Safari Junction Adesan and dispossessing the owner of the day’s sales.

”Upon the distress call, the DPO Mowe division, SP Folake Afeniforo, quickly mobilized the division’s patrol team and the so safe corps men to the scene where the two suspects were arrested.

On searching them, it was discovered that they came to rob the shop with toy guns which looked perfectly like original pistols.

On interrogation, the 19 years old Nweke Joshua, informed the police that it was Chioma Okafor who came with the idea of carrying out the robbery operation in order for them to have some money.

He stated further that it was Chioma who bought the two toy guns and gave him one to use for the operation.” the statement read in part

Oyeyemi added that the suspects went to the shop and pretended like customers, but they suddenly brought out guns and ordered the shop owner to hand over all money in his possession to them. He said luck ran out of them when police and so safe corps men arrived at the scene before they could escaped.

Meanwhile, the Commissioner of Police, CP Lanre Bankole, has directed that the suspects be transferred to State Criminal Investigation Departments for discreet investigation.