28 suspected kidnappers, robbers and cultists arrested by the Nigeria police in Edo State 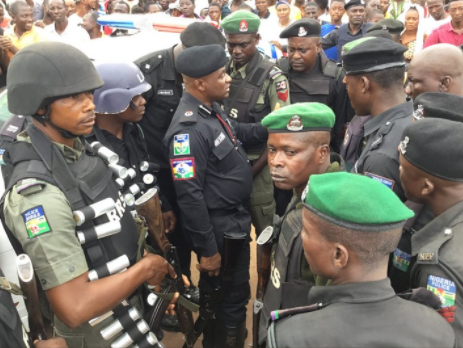 28 suspected kidnappers, robbers and cultists arrested by the Nigeria police in Edo State

The Police Command in Edo State today announced the arrest of 28 suspected kidnappers, armed robbers and cultists terrorising the state. The state Commissioner of Police, Johnson Kokumo, announced this while briefing the media on the command’s activities in the last two weeks.

Kokumo said that four of the suspects were arrested for alleged involvement in kidnapping, 11 for armed robbery and 13 for cultism. He disclosed that of the four kidnap suspects is a Fulani herder, while two others disguised themselves as herders in order to perpetrate their crime.

The commissioner said that the four kidnap suspects had confessed committing the crime. He said that items recovered from the kidnap suspects were one AK 47 riffle with a breech no. KO 340119, 10 rounds of 7.62mm ammunition, one Dane gun, a cutlass, a dagger and some charms.

Kokumo further disclosed that one locally made pistol, one single barrel short gun, two live cartridges and three telephones were also recovered from the suspected cultists. He reiterated the command’s commitment to fighting crimes while commending the continued assistance of other security agencies and residents of the state in volunteering credible information.