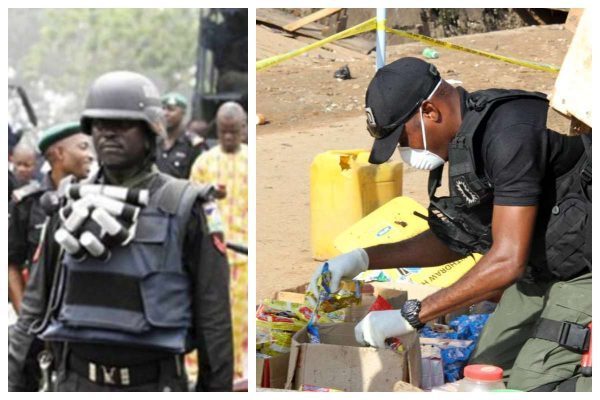 The Delta State Commissioner of Police, Adeyinka B. Adeleke has said that the Police has uncovered objects suspected to be IEDs along Ughelli/Patani road in Ughelli North Local Government Area of Delta State.

The IEDs were uncovered by a team of anti-robbery squad led by SP Masoyi Dadi.

According to CP Adeyinka, “On 21/2/2019 at about 1945hrs, the team while on stop and search duty along Ughelli–Patani road intercepted a white Toyota Hilux Van unregistered, which refused to stop.

“The team gave the vehicle a hot chase, the two (2) occupants abruptly stopped and escaped into a nearby bush. Upon thorough search of the vehicle, 128 pieces of 60mm.156 kg emulsion chemical substances and 5 pieces of electric detonators all concealed in several black bagco bags along with Hilux van were recovered.

“The Items which are suspected to be explosive components have been handed over to Bomb Disposal Unit who have since confirmed them as such.”

CP Adeyinka, however, said there is no cause to be apprehensive over anything.

He assured Deltans against the backdrop of the recently recovered IEDs, stressing that members of the public should be vigilant and security conscious, and report any strange objects to the police or any security agency nearest to them.

CP Adeyinka warned that anybody in any guise that has an intention to cause mayhem or disrupt the election by any means will be seriously dealt with.