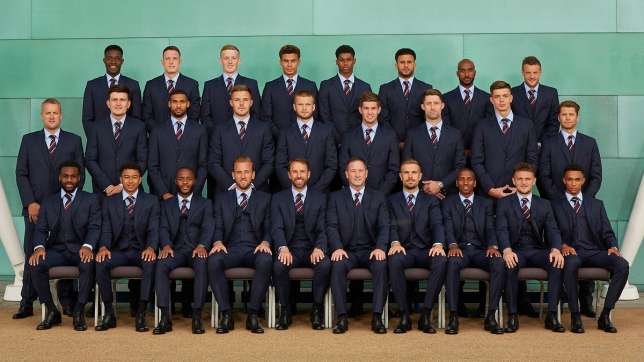 The England team to the 2018 FIFA World Cup gathered in suits for their official photo.

England stars were suited with style before they travel to Russia for the 2018 FIFA World Cup on Tuesday, June 12.

Harry Kane and his teammates were given the complete suit package for their photo shoot before they departed for the tournament.

Stars such as Dele Alli, Raheem Sterling, Alexander Trent-Arnold were all decked out in a £413 attire package for each of the players from Mark and Spencer’s outfits.

The Three Lions travel to Russia with victories against Nigeria and Costa Rica in their preparatory games.

Gareth Southgate’s side are the second youngest team to Nigeria going into the World Cup finals and expectations in Russia are not as hyped up as previous World Cup appearances.

The players appeared to be in good spirits as they posed for pictures with the coaching crew.

The English team were all smiles in the photo shoot and will hope to progress from the group stage which will be an improvement on their last outing at the World Cup.

England’s Three Lions take on Tunisia at the Volgograd Arena in their opening match of the tournament on Monday, June 18 before subsequent games against Panama and Belgium.