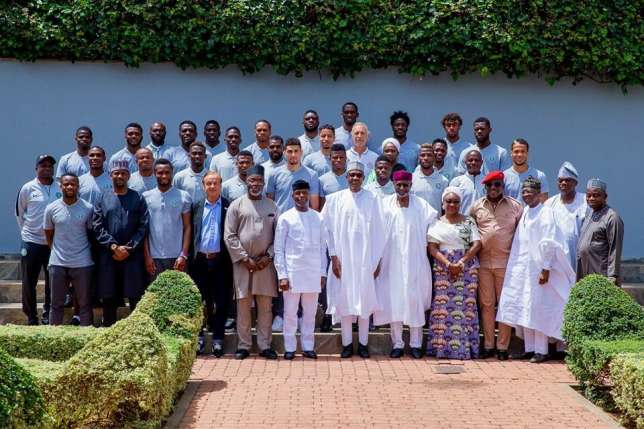 Buhari tasks the Super Eagles to bring the 2018 World Cup trophy back to Nigeria.

Super Eagles players on Wednesday, May 30 met with the president of Nigeria Muhammadu Buhari and his vice Yemi Osinbajo in Aso Rock.

The Super Eagles of Nigeria who are preparing for the 2018 FIFA World Cup arrived in Abuja on Tuesday, May 29 to meet with the president before leaving the country for the tournament in Russia.

The players were on Wednesday received by Buhari and his vice Osinbajo who tasked them to play a clean and fair game but bring the World Cup trophy back home.

Buhari said that the team is very young but encourage them to display the Nigerian spirit and their knowledge to a great advantage over their opponents.

The meeting was held just before the commencement of the weekly Federal Executive Council, (FEC).

The Super Eagles will leave for London later today where they will take on England in a friendly game on Saturday, June 2.

After the friendly game in London, the Super Eagles will head for Austria where they will camp for eight days at the world-renowned Avita Resort in Bad Tatzmannsdorf before heading to Russia.

The Super Eagles of Nigeria also have a friendly game on Wednesday, June 6 against the Czech Republic.