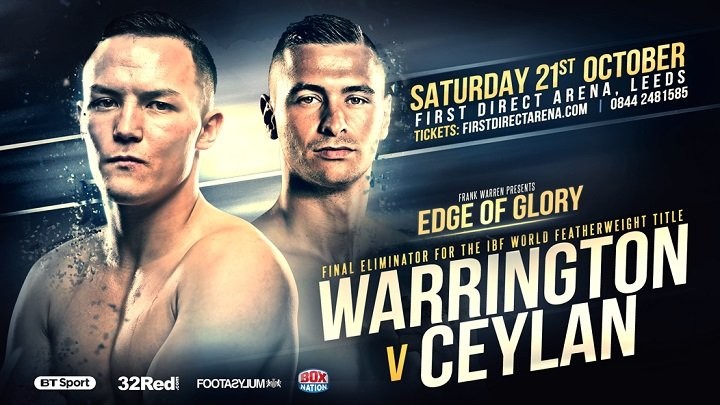 “This is another big step up in class for Josh,” Warren said. “He is desperate to get himself in the world title mix and he has a fantastic opportunity to do so on Oct. 21. Ceylan is a former European champion and will bring out the best in him.”

Warren said the fight was made after world titleholder Lee Selby, of Wales, “declined a substantial offer” to defend his 126-pound belt against Warrington.

Warrington and Warren themselves turned down an offer to face 2012 U.S. Olympian Joseph Diaz in a world title eliminator for another organization on Sept. 16 in the co-feature of the Canelo Alvarez-Gennady Golovkin HBO pay-per-view card at the T-Mobile Arena in Las Vegas.

“This is a proper fight and one that I am massively up for,” Warrington said. “Ceylan is an undefeated former European champion but that doesn’t matter to me. The way I see it is that he’s the one I have to beat to make myself the mandatory challenger. This won’t be an easy fight but there are no easy fights at this level and with so much at stake. With Selby not taking a fight with me, it’s left me annoyed and even more hungry to produce a massive performance on Oct. 21. You’re going to see the best-ever version of Josh Warrington against Ceylan. Like I keep saying, the fight with Selby is the one I have always wanted. Let’s see if he is still the [IBF] champion when I’m the mandatory challenger.”

In his last fight in May, also at First Direct Arena, Warrington scored his biggest victory so far, a majority decision against former junior featherweight world titleholder Kiko Martinez.

Ceylan, 28, who has fought most of his fights in Denmark, with three in Germany and one in Finland, is coming off a fourth-round technical draw against unbeaten Isaac Lowe in March. The fight was called early because an accidental head-butt left Ceylan with a cut and unable to continue.

“Josh Warrington is a good technical fighter,” Ceylan said. “I look forward to testing my skills against him. He is a top-level opponent and I know I will have to be at my best to beat him. I always enjoy fighting British opponents. British guys are always very good, and when I fight good opponents, it brings out the best in me. I think Josh might be my toughest opponent to date so I will need to be on top of my game.

“My last fight was against another English guy, Isaac Lowe. He wasn’t as good as Josh. He was more of a street-type guy who just wanted to fight. Josh is more of a clever, technical fighter so it will be a different challenge and a more difficult fight. I’m really looking forward to fighting in the UK.”

Warrington and Ceylan are scheduled to meet face-to-face for the kickoff news conference on Sept. 4 in Leeds.

“I’ve watched some of Josh’s fights and Leeds looks like an awesome place,” Ceylan said. “He’s always got a lot of fans behind him, which is going to make for a great atmosphere. I can’t wait to experience it. My dream has always been to fight for a world title, and now, I’m only one fight away, and that gives me all the motivation I need to beat this guy. I wouldn’t have taken the fight if I wasn’t confident of winning. After I beat Josh, I’ll be ready for Lee Selby. I’m training hard and I will be at my very best on Oct. 21.”