TY Danjuma Has Confirmed That Buhari Is Dead, The Man In Aso Rock Is Jubril – Nnamdi Kanu Speaks On TY Danjuma’s Top Secret 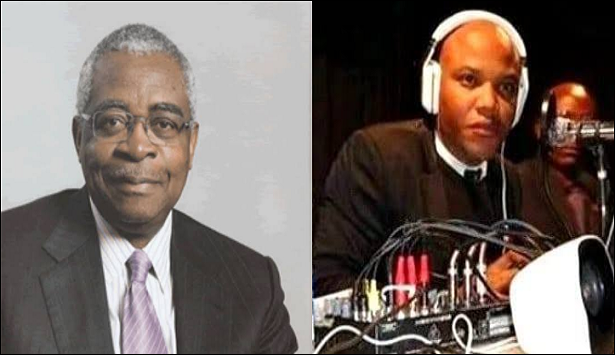 TY Danjuma Has Confirmed That Buhari Is Dead, The Man In Aso Rock Is Jubril – Nnamdi Kanu Speaks On TY Danjuma’s Top Secret Nnamdi Kanu, the leader of the proscribed Indigenous People of Biafra (IPOB), has claimed that Fulanis would keep ruling Nigeria because they control the military, judiciary and INEC.

The pro-Biafra activist was reacting to a statement by former Minister of Defence, General Theophilus Danjuma (Rtd).

Recall that TY Danjuma had stated that Nigerians will no longer sleep if he reveals what is happening in the country.

Speaking further, the retired general lamented that everybody seems to have lost their voice and become scared in Yorubaland.

Danjuma made the submissions while speaking on Thursday in Ibadan during the launch of a book, 70 Years of Progressive Journalism: The Story of the Nigerian Tribune and the presentation of Tribune’s Platinum Awards.

In Yorubaland, everybody seems to have lost their voice, scared. And people appear not to care about what is happening. If I tell you what I know is happening in Nigeria today, you will no longer sleep.

“So, Chief Ayo Adebanjo’s warning and advice are very timely. If you want details, I will give it to you privately.

“We are in a big hole as a nation. And people who put us in this hole have continued today. So, we’ve to wake up. Only we can save ourselves.

Reacting in a live broadcast on Saturday, Nnamdi Kanu said Danjuma’s statement has confirmed his claims on Buhari’s death.

Danjuma was prominent in the running of the zoo. They are all under a satanic oath but thought it will be rosy for them and never realized that Abba Kyari has other plans for them.

“Now they know the trouble Nigeria is in under the present administration.

“They know the truth that Buhari is dead and what we have is Jubril of Sudan but didn’t want to say the truth because they don’t want to prove IPOB is correct to the world.

“If we don’t do anything and do it quickly, it will be too late for us. Didn’t you hear what Danjuma said?

“I said it that two things will give us Biafra; the involvement of our women and the rising of our people in the United States.

“Do you know why Fulanis will rule the zoo for 100 years? It’s because they own the military, INEC and the judiciary.

“Danjuma, Uzor Kalu, Ifeanyi Ubah, all of them were warned and told that the only way you can survive is by supporting IPOB.”