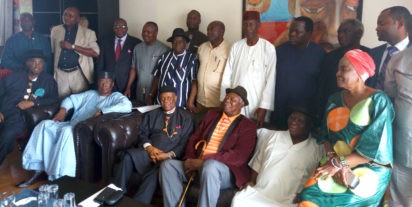 Lagos—THE Pan Niger Delta Forum, PANDEF, Afenifere, Ohaneze Ndigbo and the Middle Belt Forum has set up a movement known as the Mass Alliance for Inclusive Nigeria, MAIN Front to deepen the clamour for the country’s restructuring. L-R (Sitting) Alabo Tonye Graham-Douglas, Former Minister of Aviation and PANDEF Leader, Rivers State; His Excellency, Prof Oserheimen Osunbor, SAN Former Governor of Edo State; His Excellency, His Royal Majesty, King Alfred Diette Spiff, Pioneer Military Governor of Old Rivers State, Amayanabo of Twon Brass and Co-Chairman, PANDEF CWC; Chief Dr Edwin Clark, National Leader, PANDEF, Mrs Marie Ebikake, Former Commissioner for Transport, Bayelsa State in a Group Photograph with other Members of PANDEF when Pan Niger-Delta Forum [PANDEF] Held its 4th General Assembly Yesterday in Port Harcourt. Photo: Nwankpa Chijioke In a statement by PANDEF leader, Chief E.K. Clark; Afenifere leader, Chief Ayo Adebanjo; Ohanaeze Ndigbo President General, Chief John Nwodo and President, Middle Belt Forum, Dr. Bala Takaya, the leaders expressed worry over the current state of the nation. In a statement titled: ‘Nigeria at crossroads: Main front to the rescue’, the leaders said: “Nigeria is, at the moment, in a state of inertia, with her people stranded at the juncture of dilemma, pondering as to what path leads to socio-economic emancipation, where the future of our country’s younger generation can be secured, and our women saved from needless anxiety over what fate awaits their children. ”As a country of energetic and hardworking people, we have not always been like this. For long rendered prostrate and made to exist in a state of suspended animation, our country now is on a fast-tracked race to a bleak future for the unborn children. “Our country has never been in a more dire strait than it is today with the virtual collapse of governance, crass display of insensitivity, the arrogance of power, unquantifiable corruption, and the country fast becoming a laughing stock and butt of practical jokes in enlightened circles. Beyond the hyperboles, and given the reality of our existence, the future ended yesterday if the ‘state of anomie’, where lives have become cheap and un-guaranteed, with almost assured deaths of children and women, including the unborn babies, and destruction for family compounds and communities. ”Without sounding pessimistic, under the present social order, the quest for peace and socio-political progress, no matter the sincerity of individual actors, will remain, regrettably, an unfulfilled passion.” On the need to salvage the country from its current state, the leaders said: “In the circumstances, our major assignment, is to salvage the ship of the Nigerian state tottering in a scarily rudderless manner in the roaring waters of insecurity, economic decline and permanent political tension, is the restoration of stolen Nigeria ‘Article of Faith’, amongst Nigerians. ”The point being made, in no unmistaken terms, is that the dismantled federal architecture must be reconstructed, where each state in Nigeria will be self-accounting with respect to its nature-endowed natural resources, of which no federating unit in Nigeria is denied of God’s numerous gifts to His creatures, and self-securing of lives and property within its constitutionally-defined geopolitical space. ”This is the irreducible minimum item of a social contract that our long-suffering people demand of any group and association that seeks to take control of our country’s political destiny, henceforth. This precisely is what we, the Mass Alliance for Inclusive Nigeria, pledge to affect.” Demanding the immediate release of the remaining Dapchi school girls, Leah Sharibu, the leaders stated that “While we rejoice with the parents whose daughters have been returned, we strongly demand the immediate release of Leah Sharibu, who remains in the custody of her captors, given her refusal to denounce her Christian faith. The Nigerian state cannot claim to have closed this sordid saga for as long as Leah and outstanding Chibok Girls remain in captivity.”
Share
Facebook
Twitter
WhatsApp
Pinterest
Linkedin
ReddIt
Email
Print
Tumblr
Telegram
Mix
VK
Digg
LINE
Viber
Naver
Previous articleIn Jigawa Fire kills triplets, brother in Hadejia
Next articleLagos state police commissioner, Edgal Imohimi, debunks reports of herdsmen attack on passengers along Lagos-Ibadan expressway