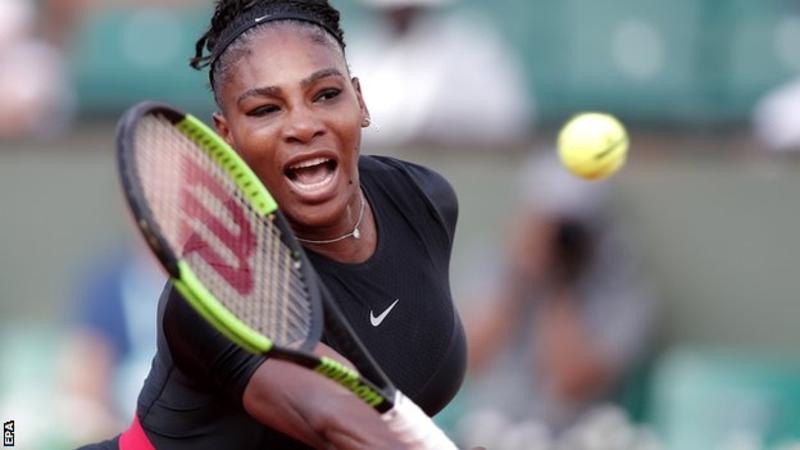 American Serena Williams believes she can play even better than she did before she took a break from tennis to give birth.

The 36-year-old defeated Australia’s 17th seed Ashleigh Barty 3-6 6-3 6-4 to reach the third round of the French Open – her first Grand Slam since winning the 2017 Australian Open.

“I’m probably not where I was before I left,” said the 23-time major winner.

“I’m definitely going to get there, but I also want to get beyond there.”

After her opening match, Williams played down her chances of winning a joint-record 24th Slam, saying she was not putting any pressure on herself to equal Margaret Court’s tally so soon into her comeback from a difficult birth.

Find out how to get into tennis in our special guide.

Williams, who said she was “lucky to survive” the birth, has spoken about Olympia being the main focus in her life, but also made it clear she had not lost any of her will to win.

And it showed against Barty, after it had looked initially as if the American would be exiting at the second stage – something she has not done in a Slam since the 2014 tournament at Roland Garros.

A double fault at 0-30 in the sixth game presented Barty with the first opportunity of the match, one she was gifted when Williams planted a forehand well long.

The former world number one offered little threat on the serve of the Australian, who closed out the opener in 28 minutes.

Barty broke in the opening game of the second set, but Williams showed fight to wipe out that advantage in the next game and win the following three for a commanding 4-1 lead.

With the backing of half-full Chatrier on a late Paris evening, Williams’s rhythm continued to improve and she served out the set with an ace as the match ticked past the hour mark.

The American broke in the third game of the decider, but missed a decent chance to break again for 4-1.

Her path to victory, though, was only held up by an extended Mexican Wave from the Chatrier crowd, which had the umpire begging for quiet and left Williams laughing.

She regained composure to hold for a 5-3 lead and, after after missing a match point on Barty’s serve, took her second with a thumping backhand winner down the line to the delight of the crowd.

Williams added: “I felt like in the first set I didn’t play bad. I just didn’t make any shots. So I guess it is bad. But I had all the right ideas, like coming to the net and hitting all my shots. They just weren’t going in.

“For me, that was kind of like a positive thing, because it wasn’t like I was playing the ultimate match. I was just making so many errors.

“I thought I’ve got to cut down on the errors, and I’ve just got to come out here and fight. And that’s what I did.”

The versatile Barty outfoxed Williams in the opening set, and the Australian got off to a flyer in the second when the current world number 451 played an awful service game.

She framed a smash and put a regulation drive volley into the net to drop serve, and yet within a game the whole tenor of the match had changed.

Williams let out a spectacular roar after a backhand service return winner, and a rather uncertain crowd took that as a cue to wake up.

Like so many before her, Barty did start to make more errors in the face of such an intense presence. But in just her second clay court match in two years, there was enough evidence to suggest Williams can also pose a significant threat to others here at Roland Garros.