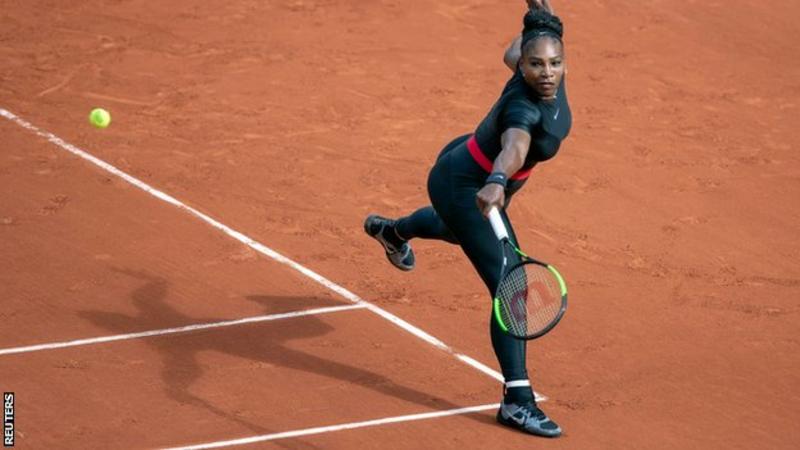 Serena Williams said she felt like a “superhero” in the black catsuit she wore during the 7-6 (7-4) 6-4 win over Kristyna Pliskova at the French Open.

The temperature hit 25C in Paris but it did not seem to affect the 23-time major winner in her first Grand Slam match since giving birth last September.

“I feel like a warrior wearing it, a queen from Wakanda [referring to the Black Panther movie] maybe,” she said.

“It was comfortable to wear.”

The 36-year-old added: “I’m always living in a fantasy world. I always wanted to be a superhero, and it’s kind of my way of being a superhero.”

Williams also said the outfit helped her cope with the issue of blood clots, which she revealed, in February, almost cost her life.

“I had a lot of problems with those – I don’t know how many I have had in the past 12 months,” she said. “It definitely has little functionality to it.

“It’s a fun suit, but it’s also functional so I’m able to play without any problems.”

The contest between the two big servers – who fired down 28 aces between them – was a tight affair. The opening set went with serve and eventually to a tie-break in which Williams bounced back from 3-0 down to clinch it.

In contrast, the service game of both players dipped markedly in the second set, with points won on the first serve falling by an average of 27%.

However, it was Williams who made the fewer errors and secured the most important break to take a 4-3 lead before she sealed victory in the 10th game.

The three-time French Open singles champion will now play Australia‘s Ashleigh Barty in the next round.

Williams, who returned to tennis in March, was asked about her chances at Roland Garros – a tournament she last won in 2015.

She said: “I don’t know. I’m definitely here to compete and do the best that I can do.

“I’m not putting any pressure on myself as I normally do.”

The American was also asked whether her experience of being at a Grand Slam had changed since becoming a mother.

“The biggest difference is definitely I’m semi on time today,” she continued. “It’s because I want to get home to see [daughter] Olympia, because I have been here all day.

“There were a couple of rain delays so I wasn’t able to [see her]. If I’m not practicing, we’re hanging out.

“I’m concerned how that’s going to work out for me, because normally in Grand Slams I do spend a lot of time at the site. She‘s so young, I don’t really bring her.”