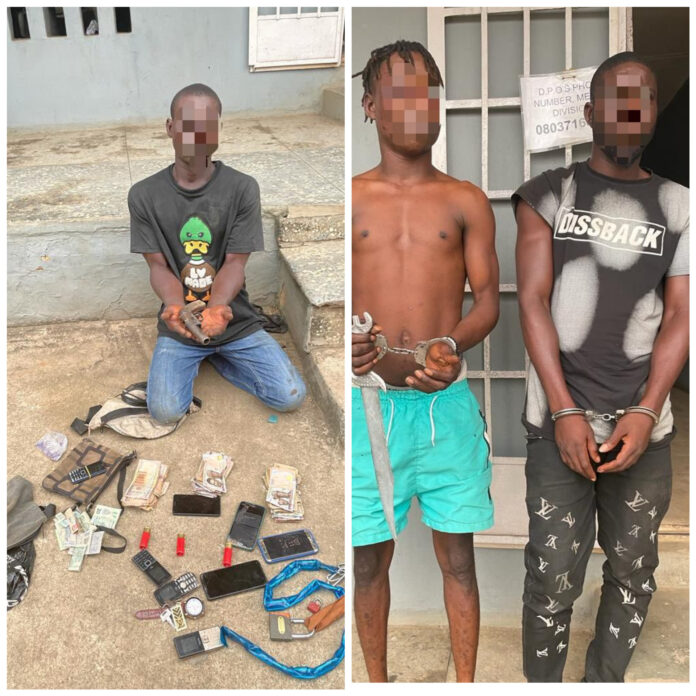 Operatives of the Lagos State Police Command have arrested three suspected armed robbers for robbing pedestrians of their valuables in Meiran area of the state.

Spokesperson of the command, SP Benjamin Hundeyin, who disclosed this in a statement on Friday, December 16, 2022, said the suspects fled upon spotting the policemen.

According to the PPRO, the policemen gave the robbers a hot chase, apprehended one of them, Azeez Jimoh and recovered a locally made pistol, unexpended cartridges, stolen items from him.

Further investigation led to the arrest of the two fleeing members of the gang, Wasiu Adegbola and Oluwaseun Ajayi.

“On 15/12/2022 at about 2350hrs, three men using a motorcycle, while robbing pedestrians, spotted Meiran Division patrol officers and took to their heels,” the statement read.

“After a hot pursuit, Azeez Jimoh was arrested with a locally made pistol, three unexpended cartridges, eight stolen phones, a wristwatch, a security chain and padlock and N93,200 cash. Efforts are on to arrest the fleeing two.

“Investigations led to the arrest of the other two suspects: Wasiu Adegbola aged 22 and Oluwaseun Ajayi aged 30. The prosecution follows at the conclusion of investigation,” he added.