Pacquiao arrives in Australia ahead of title fight 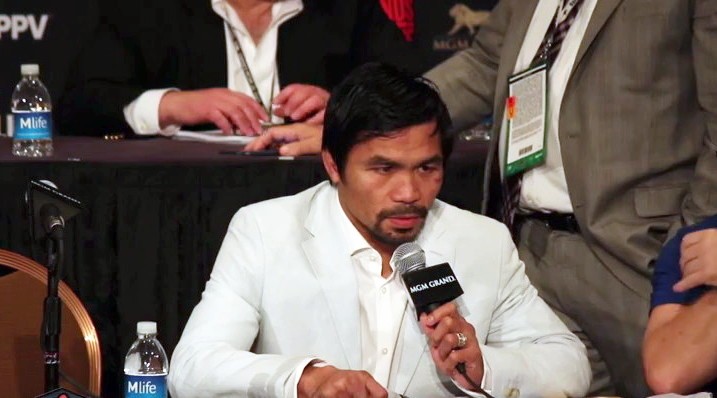 BRISBANE, Australia — Manny Pacquiao was expected to attend church and have a light training session on Sunday in Brisbane, after he arrived late Saturday for his July 1 world title fight against Australian Jeff Horn.

The reigning WBO welterweight titleholder left his hometown of General Santos City in the Philippines and landed at Brisbane International Airport on Saturday night.

He was escorted to his chartered A330 plane — emblazoned with “PacMan” on the back of the fuselage — by military personnel in the Philippines.

The 38-year-old Pacquiao was accompanied by trainer Freddie Roach, conditioning coach Justin Fortune, sparring partner George Kambosos Jr. and other members of his entourage, which his spokesman said totaled about 160.

“Training is good. We did a lot of hard work. I am very excited for the fans to give a good show to show my best and in boxing ring,” Pacquiao told Australian Broadcasting Corp. radio. “Some reports coming out of the Philippines that I haven’t been training hard are not true. It just happens that when some of our friends came around to our training camp, we weren’t doing much, and people assumed I wasn’t training hard.”

“He has the best work ethic in the world. He trains hard every day, and we do 48 boxing rounds every day, nonstop — just work, work, work,” Roach said. “We are here to win the fight. We don’t take anyone lightly.”

Pacquiao, who now is a Philippines senator, has a career record of 59-6-2 with 38 knockouts. The fight against Horn will be Pacquiao’s first defense of the title he won in November with a unanimous decision over Jessie Vargas.

The fight is expected to attract a sellout crowd of about 50,000 at the outdoor Suncorp Stadium in Brisbane. It is scheduled for early afternoon next Sunday, which will be Saturday evening in the United States. The fight card will air live on ESPN at 9 p.m. ET.