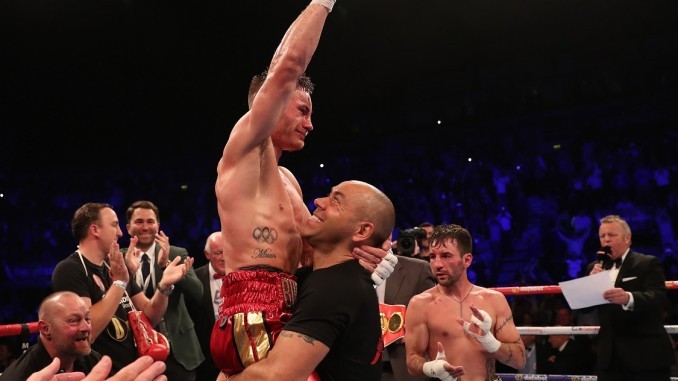 Junior welterweights Ivan “The Beast” Baranchyk and Keenan Smith will put their perfect records on the line against each other in the main event on July 14 at the Buffalo Run Casino in Miami, Oklahoma, where Baranchyk has become a crowd favorite.

The fight will headline a prospect-laden “ShoBox: The New Generation” quadrupleheader of eight-round fights on Showtime (10 p.m. ET/PT), GH3 Promotions and Tony Holden Promotions have announced.

“I am very excited and thankful for the opportunity to come back to fight on ‘ShoBox’ again,” said Baranchyk, who will be making his fifth appearance on the series. “Smith is a tough fighter and a ‘ShoBox’ alum himself, so I will enjoy knocking him out.

“I’m not going to downplay him. He is a good opponent. I’ll be alert, and I’ll pay attention to what he brings on, but I’m battle-tested. He hasn’t faced anybody like me. I’ll gladly hand him his first loss and move a step closer in my pursuit of a world title.”

Ivan Baranchyk, left, will put his 14-0 record on the line when he faces Keen Smith on July 14. Stephanie Trapp/Showtime

Smith, who sat out all of 2016 recovering from a shoulder injury, has won two low-level fights so far this year and will be facing the most formidable opponent of his career.

“This is a very big fight for me, perhaps the biggest fight of my career,” said Smith, who turned pro in 2010 but has had long stretches of inactivity. “I’m stepping up in opposition and I’m ready for what’s to come. I am training three times a day and I’m in the best shape of my life.

“I know Baranchyk comes to fight, but I also know his weaknesses. I’m ready for his wild swings. I’m ready to be the main event in a nationally televised fight. Needless to say, a win will bring bigger and even better opportunities. I can’t wait.”

“I have seen Chinea fight twice. He is a pressure fighter,” Sims said. “He is nothing that I haven’t seen before. I’m ready for him. Another wins keeps me moving forward to my ultimate goal of being a world champion one day.”

Said Chinea: “I am honored to be back on ‘ShoBox,’ where I made my first TV appearance. Sims was an accomplished amateur with a deep pedigree. He is tall with a good reach. He is a very good boxer, but I’m better. It’s going to be a rough fight. I am prepared and in great shape. A win will get me one step closer to some type of title fight down the line. I am just looking at right now and getting this win. By the end of the year, I see myself moving into contention if all goes well.”

Also on the card, bantamweights Glenn Dezurn (9-0, 6 KOs), 29, of Baltimore, and Adam Lopez (16-1-1, 8 KOs), 26, of San Antonio, will meet. Dezurn was very impressive in his last fight, scoring an eight-round decision over then-unbeaten Leroy Davila on “ShoBox” on April 14. Lopez will look to bounce back from his first defeat, a ninth-round knockout to Daniel Roman on Jan. 20.

“This is the type of card is what ‘ShoBox’ is all about — four evenly matched pairings that have the potential to be action packed fights,” GH3 Promotions’ Vito Mielnicki said. “I think the fans who watch this show will come away thoroughly entertained.”