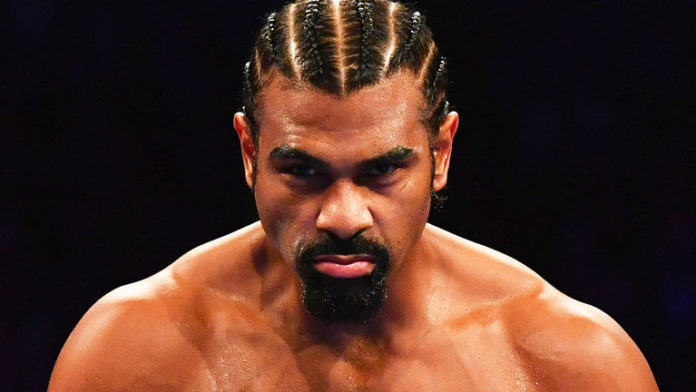 Okolie impressed against Hayemaker Promotions heavyweight Joyce and will now aim to showcase his ability against fellow unbeaten cruiserweight Isaac Chamberlain on Saturday, from 7pm.

“Watching their fights on television, I have always swayed towards Chamberlain,” Haye said. “But watching Okolie sparring Joe Joyce, he showed me an element that I hadn’t seen in any of his fights.

“He took some big shots from Joyce who is 6’6” and is 18 stone, on the button. Body shots and head shots.

“He proved to me that he has a world class heavyweight chin. He’s not getting knocked out anytime soon.

“If I were to have judged his chin from his fights, I would have said: ‘maybe he could be chinny’. He looked gangly.”

Haye, like Okolie and Chamberlain, was once a cruiserweight prospect from London and won a world title in that division before also capturing the top prize as a heavyweight. He believes Okolie can emulate his achievements.

“I watched [Okolie] do eight rounds at a heavy, heavy pace that most world-class heavyweights crumble under,” Haye said.

“I have seen world-class heavyweights quit after what Joyce [does to them]. He is one of the only guys that I’ve seen sustain that onslaught, and come back with some of his own. That showed me he is going to go all the way, not just as a cruiserweight but as a heavyweight as well. I believe Okolie can be a two-weight world champion.”

Haye will return on May 5, in a rematch with Tony Bellew, and has insisted that he has recovered from the bicep injury that initially postponed the fight.

“The injury is healing well and the operation was a flying success,” he said.

“I’ve worked every day to make sure I’m not just as good but better than before. I’m punching already, doing pull-ups, press-ups, everything I could do before.

“What happened last time to postpone the fight was a freak accident, like getting hit by a car, there’s nothing you can do. Unfortunately, it happened and thankfully the rematch got rescheduled.”

Haye will be completely fit for rematch with Bellew – Hearn

Where Is America’s Next Wilder