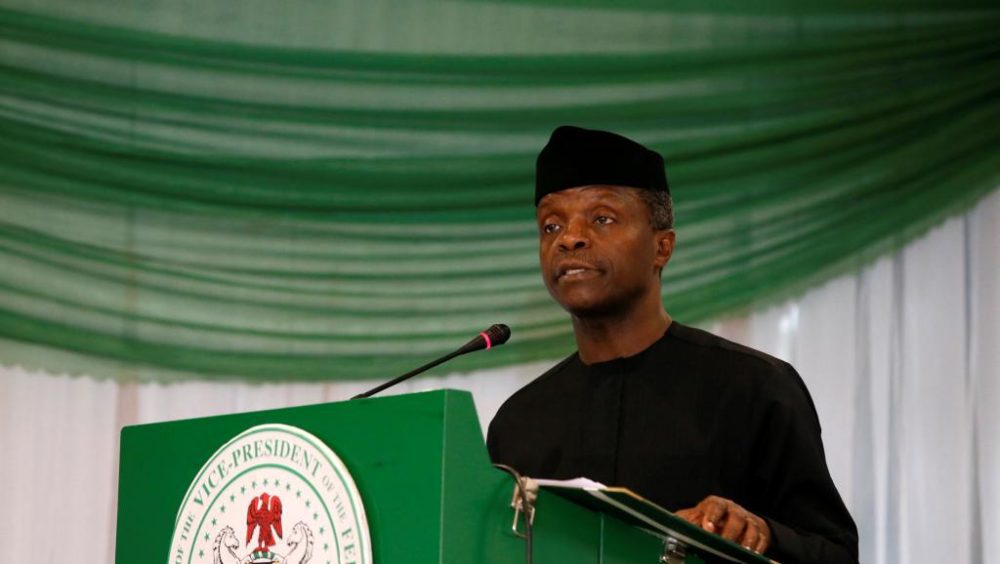 NAN reports that Osinbajo spoke on Sunday during his house-to-house campaign in Ifako-Ijaiye Local Government Area of Lagos State.

He said grand corruption, which plagued the 16 years administration of the Peoples Democratic Party (PDP), contributed to the lack of infrastructure for Nigerians.

“The difference between us and the PDP is that we don’t steal government resources. We use it for the people. We earn less and we spend more on the welfare of people than the previous government.

“Everybody know Buhari is an honest man.
He will not steal public fund. We shall continue to fight corruption so that we can have enough money to provide infrastructure. We have to build on the foundation we have laid.

“The corrupt people will be jailed. That is why the corrupt elements in the opposition are desperate to regain power. We can’t leave government for the thieves.

“You should vote for APC because it is the only party that can do the job. We should not allow PDP to return to power,” he said.

Osinbajo said that the issue in the coming election was creation of jobs for youths, more power supply, provision of infrastructure, adding that the present administration planned to complete Lagos-Kano Rail, Lagos-Ibadan Expressway and the Second Niger Bridge.

“The next level will be much better than today. More power will be available to the people and there will be more infrastructure. Too much corruption have retarded our progress. That is why Buhari is fighting corruption.

“If there is no corruption, there will be money to carry out the developmental projects. Buhari will fight for young and old. He will not allow anybody to steal public funds.

“Government will decentralised power so that there will be adequate and efficient distribution of power in the country. Government will provide adequate electricity supply for the household, artisans, corporate organisations and business enterprise,” he added.