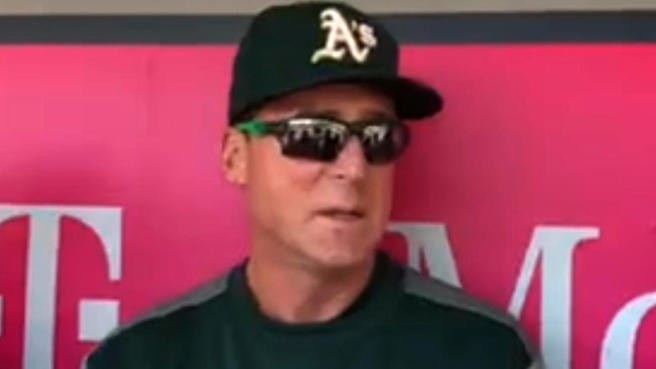 It still hurts every time. We’re accustomed to it by now, our All-Stars being traded year after year, but seeing the official headline always stings no matter how well you’ve prepared yourself. Now it’s real. Yonder Alonso is gone, like Sonny Gray before him, and Sean Doolittle before him, and countless more in summers and winters past.

That doesn’t mean this has to be a sad time, though. Bittersweet, perhaps, but more than anything hopeful. We’re watching the Next Good A’s Team assemble right in front of our eyes, a group of quality prospects all graduating together at the same. They won together all the way up through the minor leagues, and we’ve already seen glimpses of what they look like when they click as a group.

Before you bemoan that they’ll all merely be traded again a couple years down the road, ripped away from us once more just as we’re growing to love them, remember that things will be different soon. Billy Beane has made it clear that the A’s are looking to change their culture to go with a new stadium, and that means keeping their stars rather than continuing the perpetual cycle of turnover. It’s entirely possible that one of the rookies in the current starting lineup could someday sign a long-term contract in Oakland.

But we’re not there yet, and in the meantime this summer demanded another spin of the revolving door. On Sunday that meant Alonso, whose status as an impending free agent sealed his fate on a last-place team. The A’s wisely cashed in early before losing him for nothing after the season, just as they did with every single one of their other expiring contracts the last two summers. This time they netted outfielder Boog Powell — not a Top 100 prospect, but a useful one who plays a position of need (CF) and could be an MLB role player right away. It’s not a massive haul, but it’s a solid return in an age when slugging first basemen are short on value.

The Alonso trade stands out, though, from those of Sonny and Doolittle and most of the rest over these last three cellar-dwelling campaigns. The A’s didn’t just pick up a prospect in exchange for an impending free agent; they also got at-bats for Matt Olson, a top prospect they’ve been grooming for half a decade. One more piece of the new young core is now in Oakland, ready to show he belongs.

There may yet be more veterans subtracted from the equation this season, with further August trade candidates including Jed Lowrie and Rajai Davis. But even now, the youth movement is coming along nicely. The following youngsters are getting regular playing time:

That’s most of an entire lineup, and there are more prospects on the verge of arriving by next spring — most imminently IF Franklin Barreto, OF Dustin Fowler, DH Renato Nunez, and OF Boog Powell, with a longer list following close behind them. This isn’t just a few new guys coming up, but virtually an entire roster of legit youngsters. And all of that leaves aside that the current “veteran” shortstop is only 26 years old and probably hasn’t even hit his prime yet.

For now, here’s a visual for how far we’ve come. On the left is the Opening Day lineup, and on the right is what we can hope to see in August. The new wave of rookies is in bold, including Healy who simply arrived slightly sooner than the rest.

It hasn’t been quick or easy, and it’s not yet complete, but the transition above is a sign that the The Future is quickly becoming The Present. All six of the players in bold were drafted by the A’s, and soon they’ll be supplemented by some of the club’s biggest trade prizes of the last few years. And we haven’t even mentioned the pitching staff yet, which is stacked with internal rotation options and even a couple potential future aces — led by A.J. Puk, another draftee who is already in Double-A. This is what it looks like to build a team from within.

So as we bid farewell to Alonso, another All-Star we’d grown to love, don’t be glum. Losing him is a bummer, but at the same time we should be celebrating the continued rise of another new team. A particularly deep and exciting one, and one that might even end up breaking the very cycle of trades that got us here in the first place. The youth movement had already started, but now it’s taken one more big step forward.