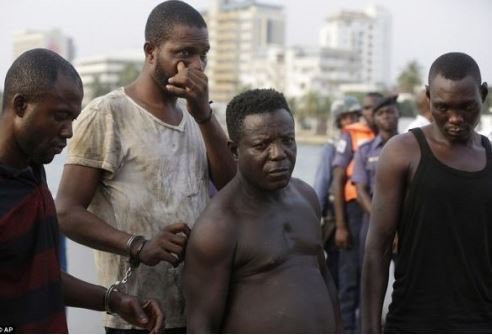 The Nigerian Navy says it has recovered 1,330 jerry cans filled with petrol, during a raid on oil thieves in Atlas Cove Island in Lagos. The Nigerian Navy Ship (NNS) Commander, Rear Adm. Maurice Eno, told journalists on Saturday night that the product was evacuated from a storage facility in Ilado/Idimangoro area of the island.

According to the naval chief, the petroleum product was stolen from vandalised NNPC pipelines on Atlas Cove Island.  Eno said that no person was found at the storage facility during the raid.  He said that the navy monitored activities in the area for about three weeks to ascertain the veracity of the information.

“On December 14, at about 8.10 a.m., a detachment of personnel from the NNS Beecroft raided the locations and discovered a storage facility having over one thousand five hundred jerricans. 1,330 of the Jerricans contained product suspected to be premium Motor Spirit(PMS) believed to have been siphoned from the Nigerian National Petroleum Corporation (NNPC) pipelines laid on the island. At the time of the raid, no person was found on the storage facility,” he said.

“The team also discovered the siphoning points where valves were connected by the vandals to steal the product. It is pertinent to note that NNPC pipelines laid on Atlas Cove Island are under the supervision and care of Top Line Security Limited/Kings Guard Security Company. It is obvious that these acts may not have gone unnoticed by these private security outfits,” he said.

Eno said that the navy was committed to assisting the NNPC in dealing with pipeline vandalism and crude oil theft.

“The navy is using this medium to warn pipeline vandals and other criminal elements particularly in our maritime environment to desist from nefarious activities and pursue lawful means of livelihood,” he said.

Marturion Cinema opens in Lagos
Burna Boy interrogated and detained by police in connection with Mr 2kay’s robbery attack at Eko hotel (photos)
FG protests against burial of 26 Nigerian girls, women Italy
Fergie Recalls Crystal Meth Addiction: “I Was Hallucinating on a Daily Basis”
Ha, whose mother/sister or aunty is angrily flaunting her breasts on social media?
Can the world’s mightiest naval fleet survive the perfect storm?
‘No Nigerian representative at the burial of the 26 young Nigerian ladies that drowned in the Mediterrenean sea’ AFP journalist, Trisha Thomas reveals
Rita Ora dragged on social media after posting ‘almost intimate’ photo with Conor McGregor
‘My government will improve aviation infrastructure’ – President Buhari
‘I was never banned at any time from entering America’ – President Buhari replies Atiku
Rwanda offers refuge to enslaved Libya migrants
Jersey Island gives conditions for return of $300m Abacha loot
Melanin Popping! Nigerian model Mary Timms slays In swimsuit photoshot
US carriers in rare Pacific op amid North Korea tensions
Nigeria’s love affair with a Norwegian fish
Photos/Video: American woman arrested in India with 1.9 kilograms of cocaine allegedly given to her by a Nigerian in Brazil
Marijuana Why do we trip when we see women smoke weed?