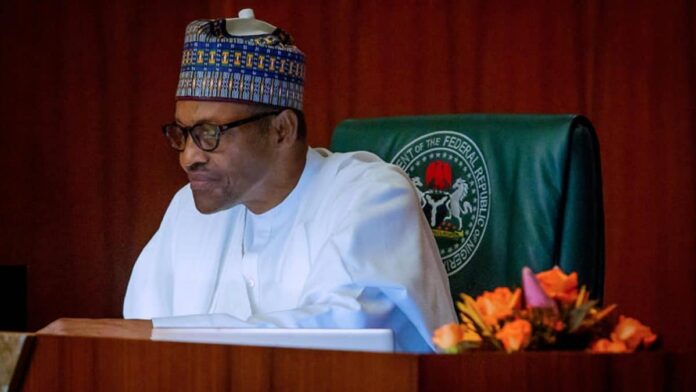 DAILY POST recalls that Buhari on Thursday sought the re-consideration and approval of the National Assembly on the 2016-2018 External Borrowing Plan of the Federal Government.

In a statement signed by its Chairman, Niyi Akinsiju, in Abuja on Sunday, BMO said the funds were necessary in order for the country to bridge the infrastructure gaps that were left unattended to by previous administrations in the country.

Akinsiju said if the requests had been fully granted in 2016, Nigerians would have seen more projects at various stages of completion across the country.

“Buhari has made a bold move by sending back the 2016-2018 external borrowing plan to the National Assembly for reconsideration.

” Nigerians need to know that when the request was rejected by the 8th Assembly led by former Senate President Bukola Saraki and Speaker Yakubu Dogara in 2016, there was no debate on the merit or demerit of the plan.

“So, a group of lawmakers who were antagonistic to Buhari and needed to extract their ‘pound of flesh’ took a step that denied Nigerians of massive infrastructure renewal.

“Just like the President said in the latest request, the lawmakers back then extricated and approved only a few out of the 39 projects the loan was meant for,” he said.

These, he said, included the federal government’s emergency projects for the North East and the Lagos-Ibadan segment of the China Exim Bank railway modernization project which were at advanced stages of completion.

According to him, power generation and transmission were also at a higher stage than what the administration met in 2015.

“We invite Nigerians to see how well the loans were used for those projects in order to know what would have been if Saraki and Dogara had not constituted themselves into a joint stumbling block,” Akinsiju said.

He urged Nigerians critical of the President’s move to have a more positive outlook.

“We understand that the people have over the years got used to government officials misappropriating external loans. We recall, for example, the 470million dollars CCTV project in Abuja, but we make bold to say this President is different.

“Aside from the Lagos-Ibadan railway project which is nearly completed, the second Niger Bridge is a good example of a promise that is almost a reality today, even as Nigerians know how previous administrations dithered on it.

“So if the Buhari administration has opted to tie these loans to projects like the Mambila Hydro Electric Power Project, Coastal railway project including the Calabar-Port Harcourt-Onne Deep Sea Port segment, Phase 2 of the Abuja Mass Rail Transit Project, the Kano-Kaduna Segment of the railway project.

“The Lagos-Kano Railway Modernisation Project, as well as other projects on agriculture, health and educational sectors, then it would be ideal to give him the benefit of the doubt.

“And with many already seeing a doomsday scenario, we will prefer to go with notable economist Bismark Rewane who is insisting that there is nothing wrong with borrowing as long as it is tied to projects that will impact the people

“Just in case many are not aware, external borrowing is an integral part of the financial plan for the current budget, so as it stands, the country is committed to doing what is necessary to bridge the country’s infrastructural deficit.

“The Presidency is indeed going to send details of the borrowing plan to the National Assembly to enable members to have a clearer insight into the President’s intention. We believe this will clear all doubts in the minds of critics when it is eventually unveiled, but suffice it to say that the 29.billion dollars loan is absolutely necessary.”

BMO chairman urged the lawmakers to keep their promise to treat requests from the Executive on merit and give speedy consideration to them.