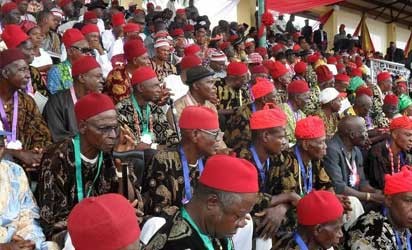 Ndigbo express support for Danjuma’s call to arms
Igbo leaders have applauded the statement by the former Minister of Defence, Lt. General Theophilus Danjuma, that Nigerians should take up arms against the marauding Fulani herdsmen who have been killing the citizens across the country, insisting that the Armed Forces have failed to protect the country from the aggressions of the herdsmen. Several Igbo leaders who reacted to Danjuma’s statement said that although his call for arms against the herdsmen came late in the day, it confirmed their fears that the leadership of the Armed Forces, as presently constituted, would never protect majority of Nigerians against the atrocities of the herdsmen. The umbrella organisation of all Igbo cultural unions, Ohanaeze Ndigbo said it had earlier cried out against the directive by the Inspector- General of Police, IGP, Alhaji Ibrahim Idris, asking the people to return their legally acquired arms to the police, insisting that it was another way of paving way for the Fulani herdsmen to overrun the whole country. Also, in his reaction, the Founder of Igbo Youth Movement, IYM, and Deputy Secretary of Igbo Leaders of Thought, ILT, Evangelist Elliot Ugochukwu Uko, said: “Danjuma’s call on Nigerians to defend themselves came very late,” adding that “it is something he should have said since the advent of this administration.” His words: “We are watching. The only thing new is that Danjuma has confirmed what everybody has suspected about the military which is that they have been protecting the killer herdsmen. “The call on Nigerians to defend themselves against ethnic cleansing by Fulani herdsmen is belated. We had known that President Buhari’s agenda in appointing his kinsmen as heads of all the security agencies in the country was to protect the killer herdsmen in the heinous crimes against humanity. “The security architecture is to allow his Fulani people embark on their Islamic Jihad or expansionist tendencies. Danjuma and his group should apologise to the IPOB leader, Nnamdi Kanu, who saw the emerging scenario and alerted Nigerians over the issue about four years ago. Also, the Eastern Consultative Assembly, ECA, welcomed the call for arms by Lt. Gen Danjuma that Nigerians should defend themselves against ethnic cleansing by Fulani herdsmen across the country. Deputy Chairperson of ECA, Chief (Mrs.) Maria Okwor who reacted to Danjuma’s call, further faulted the order by the IGP that Nigerians should surrender their private guns to the police, adding that any Nigerian who returned his legally acquired and licensed weapon to the police must be a fool. “We have always doubted the ability of the Nigerian Armed Forces to protect innocent Nigerians from the Fulani herdsmen attackers. I find it disturbing that the police high command would ask Nigerians to surrender their arms at this time when there is ethnic cleansing going on. “Any Nigerian who surrenders his legally acquired gun to the police is a fool. Nigerians should even buy more guns so that they can defend themselves. “We are wondering what the former Head of State, Gen. Yakubu Gowon and same Danjuma would be thinking now, about their roles in the Nigerian civil war. A drastic situation requires drastic action. I support what Danjuma said,” she added. However, this was even as the Igbo Leaders of Thought, ILT, has questioned the motive of the Minister of Transport, Hon. Chibuike Amaechi, in asking Ndigbo to apologise to President Muhammadu Buhari for not voting for him in 2015, describing the statement as not only comical but irresponsible. It also said that people like Amaechi were clogs in the wheel of progress in the country as he was being theatrical in his actions. Secretary of ILT, Professor Elochukwu Amucheazi said: “People like Chibuike Amaechi are some of the problems of Nigeria. The man is comical, almost irresponsible. People are talking about more serious things like restructuring and he is talking about irrelevant issues. “This is why we are not developing. He is comical and this is unfortunate.”
Share
Facebook
Twitter
WhatsApp
Pinterest
Linkedin
ReddIt
Email
Print
Tumblr
Telegram
Mix
VK
Digg
LINE
Viber
Naver
Previous articlePhotos: President Buhari receives the family of Martin Luther King Jnr in Abuja
Next articleProduce my accusers dead or alive, Melaye tells Police