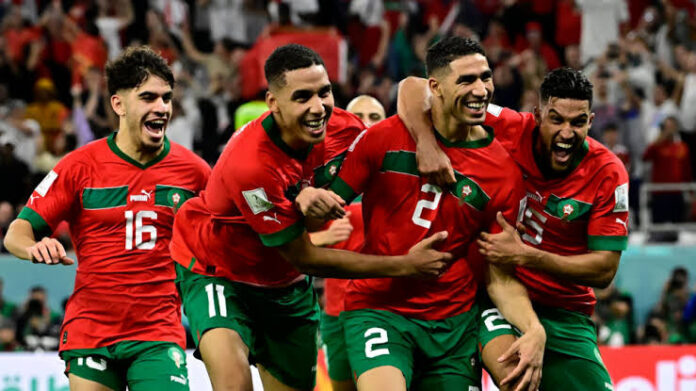 Morocco has moved from the 22nd position to become the 11th best football team in the world, according to the latest FIFA ranking.

Released Thursday, December 22, FIFA’s ranking shows Morocco is in the 11th spot ahead of Switzerland, the US, Germany, Mexico, and Uruguay.

With a 108.85 score, Morocco is also the first-best team in Africa.

The ranking recognizes Morocco’s uplifting and brilliant performances during the 2022 World Cup, where the Atlas Lions triumphed to secure the fourth spot.

The Atlas Lions made history after qualifying for the semi-finals. The qualification made Morocco the first African and Arab country to make it so far in World Cup history.

Infantino emphasized that “Morocco represented two continents” as they represent both the Arab world and Africa.

“They [Morocco] qualified for the semi-finals, which some said was surprising, but only if you didn’t know the experiences of the players and the coach.”

On Tuesday, Morocco received a homecoming ceremony fit for heroes. Thousands of fans from across Morocco lined Rabat’s streets to welcome the Atlas Lions.

Despite its win in the World Cup final, Argentina secured the second position in the FIFA ranking. Brazil tops the list, while France comes third followed by Belgium, England, the Netherlands, and Croatia, respectively.

Italy is the eighth-best team in the world, followed by Portugal, Spain, and Morocco.