Manchester United manager Jose Mourinho said his side’s title hopes are “probably” over because referee Michael Oliver failed to award them a penalty in their 2-1 loss to “lucky” Manchester City. 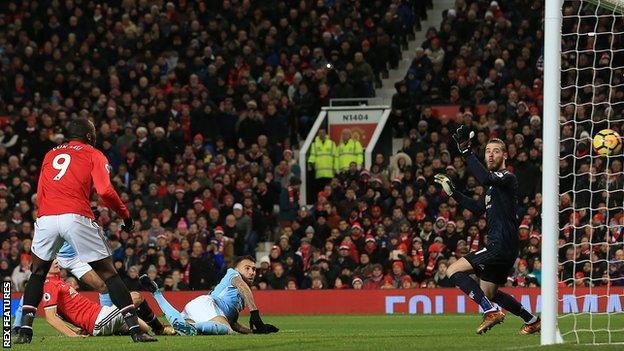 Manchester United manager Jose Mourinho said his side’s title hopes are “probably” over because referee Michael Oliver failed to award them a penalty in their 2-1 loss to “lucky” Manchester City.

Pep Guardiola’s team stretched their lead at the top of the table to 11 points and became the first team to win 14 successive English top-flight games in a single season.

City took the lead their vast superiority deserved when man-of-the-match David Silva hooked home from close range after confusion at a corner on 42 minutes, only for United to be handed a lifeline in first-half stoppage time when poor defending from Nicolas Otamendi and Fabian Delph allowed Marcus Rashford to steal in for a composed finish.

Otamendi made amends nine minutes after the break when Romelu Lukaku – who had a poor game – lashed at a clearance in the area and the City defender pounced on the rebound to score.

Mourinho’s post-match focus centred on an incident in the 79th minute, when Ander Herrera went down in the box under a challenge from Otamendi and was booked for diving.

“My first reaction is I feel sorry for Michael Oliver because he had a very good match but unfortunately he made an important mistake,” Mourinho told BBC Match of the Day.

“The result was made with a big penalty not given. That would have been 2-2.

“Michael was unlucky because it was a clear penalty.”

Asked whether the title race was over, Mourinho replied: “Probably, yes. Manchester City are a very good team and they are protected by the luck, and the gods of football are behind them.”

Before Sunday’s game, Mourinho had suggested City’s players go down too easily – something Guardiola dismissed, along with the Portuguese’s assertion United should have had a penalty.

“Last season it was the same – we won here and it was the referee. Today as well,” Guardiola said.

“Yesterday he spoke about the referee. We are an honest team. We had 65% ball possession, which means we wanted to play. We came here and did that.

“It’s not true that my players go down easily. That is not an argument I believe.”

City, who have dropped only two points in their first 16 league games, had opportunities to extend their lead but it was keeper Ederson who made the decisive late intervention with a miraculous double late save from the luckless Lukaku and substitute Juan Mata.

Is the title race over?

It is a brave call to declare the title race over in early December – but the statistics and evidence are piling up to suggest the chase is on for second place behind City.

City will effectively have to lose four games while all of their rivals need to keep winning, tough to see with Guardiola’s team having won every league match since Everton took a point at Etihad Stadium in the second game of the season.

“We are still in December. If we have 11 points when we play the second derby in April then maybe I will tell you that we have the title,” said Guardiola, who was full of praise for his side’s performance.

“We won at Old Trafford again, that is why I am the most pleased and of course for the three points,” he added. “We played good, with a lot of courage. I’m so satisfied.”

The trip to Old Trafford, and the renewal of old rivalries between Guardiola and Mourinho, was the most eagerly awaited game of the season between the two teams at the top of the table and was seen as the acid test of City’s apparent infallibility.

Those looking for cracks in the Guardiola armour pointed to City having to secure three wins against Huddersfield Town, Southampton and West Ham United with late, late goals.

If City’s confidence had been shaken at all by having to fight for victories, there was no sign here as they played with a composure and positivity that was a level above United.

There can be no doubt City were deserved winners and even showed the street wisdom of champions to run down the clock in the closing seconds, to the fury and frustration of Old Trafford.

The title race may not be over – but there was no escaping the feeling a crucial blow has been inflicted on United and the rest of City’s pursuers.

Silva may be small in stature but he stood head and shoulders above every other player in the intense heat of this game.

The Spaniard may now be 31 but it is little wonder City were so delighted to secure him on a new contract until 2020.

Silva showed again why he deserves to be ranked as a Premier League great, and one of the finest players to play for City.

Silva pounced for City’s crucial first goal, held his own in the physical exchanges and even shrugged off a heavy bang to the head in a clash with United’s Marcos Rojo.

It was a complete performance from a world-class player.

City fans stayed in their seats long after the final whistle, delivering a taunt that had echoed around Old Trafford throughout this landmark victory.

“Park The Bus, Park The Bus, Man United…” was the chant that was met with a muted response from the home support, who had seen City show more attacking intent and flair than Mourinho’s side could muster.

Until a predictable late charge, this was a strangely muted display from United. Their need for victory was arguably greater than City’s as they started the game with an eight-point deficit, but they spent much of the first half on the back foot.

Mourinho’s line-up demonstrated attacking intent with the inclusion of Lukaku, Rashford, Jesse Lingard and Anthony Martial. United also missed the power and influence of Paul Pogba, suspended after his red card at Arsenal.

It was still a surprise, however, to see City so comprehensively dominant from the opening exchanges and United were barely able to believe their luck that they went in at half-time on level terms.

Lukaku’s lack of confidence and touch did not help and there was an element of good fortune about Ederson’s late saves – but there was no doubt United did not push hard enough for victory and were second best.

United welcome Bournemouth to Old Trafford on Wednesday at 20:00 GMT and are at West Brom on Sunday, 17 December at 14:15.

Shots on Target
Home5
Away7

Fouls
Home16
Manchester City manager Pep Guardiola says Raheem Sterling’s new self-belief is behind his brilliant form after seeing him sink Southampton with a 96th-minute winner.
Aguero becomes joint-top scorer in Man City history
Chelsea 1 Vs 0 Manchester United 5 things we learnt from Super Sunday game
See jaw-dropping bikini photos of lady who claims to have the biggest butt in West Africa
Premier League stats: Romelu Lukaku, Man Utd, Man City, Mohamed Salah
Man Utd v Man City: Owen Hargreaves tips Romelu Lukaku for key derby role
Manchester United “should have been smoking cigars” in their Premier League victory over Watford, manager Jose Mourinho said.
Joel Embiid is African Player of the Week @therealkaunda @kesesports
Jose Mourinho Lukaku should be ‘untouchable’, says Manager Jose Mourinho says Romelu Lukaku should be “untouchable” after questioning his treatment by Manchester United’s fans for the second time in three days.
policeman who arrested Evans shot dead by kidnappers In Lagos
Paul Pogba dedicates goal to migrants sold as slaves in Libya
Prominent Imam says he tried to warn New York mayor about terrorism in the city but was ignored
Premier League Merseyside misery as Liverpool and Everton lose heavily Defensive frailty has long been a problem for Liverpool and they found themselves 2-0 down inside 12 minutes as Spurs…
Five of the best American cars
West Ham defender Jose Fonte ruled out for 2-3 months
Premier League With Steve Dede Mourinho still the man, Manchester City show vulnerability These are five things we learnt from the Premier League this weekend.
Kim K &amp; Kanye West sell the Bel-Air mansion they bought for $9m to a philanthropist for $17.8 million
Manchester City manager Pep Guardiola said his side “competed amazingly” as they fought back from 1-0 down to win at Huddersfield.