Premier League With Steve Dede Mourinho still the man, Manchester City show vulnerability These are five things we learnt from the Premier League this weekend. 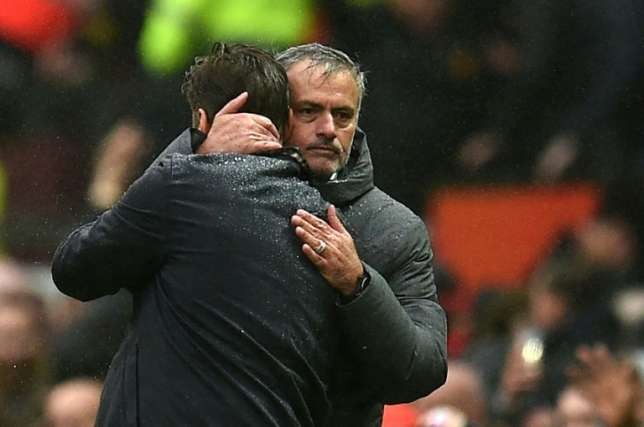 It was Premier League weekend again but with less drama this time largely because of the big teams all getting three points.

But Tottenham still lost away at Manchester United while Everton troubles continue.

1. Jose Mourinho is still the man

ALSO READ: Mourinho hails his players after 1-0 win over Spurs

Jose Mourinho had received criticism from the English media all week following his defensive tactics against Liverpool fortnight ago and their shocking 2-1 loss to Huddersfield Town a week later.

On the other hand, Mauricio Pochettino got all the critical acclaim after Tottenham’s 4-1 drubbing of Liverpool. Daily Mail even called him ‘The new Fergie’.

But at Old Trafford, Mourinho reminded everyone that he is still special. A 1-0 victory over a title rival is always a statement and Mourinho sure made one.

Apart from a 1-0 win away at Manchester City in February 2016, Tottenham have failed to win 15 away games to the top six sides in the Premier League.

Pochettino’s poor away form at the top six clubs continued with their 1-0 loss to Manchester United on Saturday. This is rather poor for the type of plaudits the Argentine manager has received.

He also needs to look farther than the absence of Harry Kane as a reason for the loss. Mourinho also had his own injury problems but got the three points.

Pochettino has done a good job with Tottenham in the last two years but he needs to fix this poor form away at any of the big six to translate his ‘successful’ Tottenham stint to trophies.

Arsenal beat Swansea but they still have problems (AFP)

Arsenal managed to come back from a goal down to beat Swansea 2-1 at the Emirates but they looked far from a top team.

Despite having the most possession, the Gunners lacked cohesion and cutting edge to hurt Swansea. They were also sloppy in defence, going on goal down and it would have been two if Jordan Ayew had done better with his chance late in the first half.

A trip to Manchester City awaits Arsenal and they must do better or take a beating from the Premier League leaders.

Pep Guardiola’s Manchester City have been on a roll so far this season, blowing everyone apart with goals but they have shown vulnerability in their last couple of games.

They were stretched by Napoli in the Champions League especially in the second half and while Burnley didn’t pose enough attacking threat to trouble them, Wolves had chances in the Carabao Cup last week.

At West Brom, they conceded two goals from sloppy defending. Other Premier League sides would look at the goals and work on exploiting this weakness.

5. Troy Deeney needs to be checked

Immediately after Watford’s 2-1 win over Arsenal earlier in October, Troy Deeney in an interview blasted the opposition, accusing them of lacking ‘cojones’ and not being up for the fight.

Despite the show of disrespect, he was lauded by the English media but his actions against Stoke City shows he has to be checked.

Deeney was lucky to be shown just a yellow card for sticking his thumbnail into the face of Joe Allen during Watford’s 1-0 loss to Stoke City.

The way he held the neck of Allen during the altercation was appealing, such actions have no place in football.

He needs to be checked and properly educated about how to treat and talk about teammates.