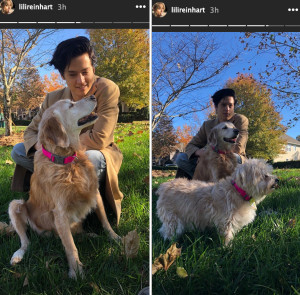 Betty Cooper and Jughead Jones are home for the holidays! Lili Reinhart has a lot to be thankful for this year, including boyfriend Cole Sprouse who she brought home with her to Cleveland for Thanksgiving.

Reinhart, 22, shared sweet Instagram Story snapshots of Sprouse, 26, playing with her dogs on a grassy lawn on Wednesday, November 21. The Suite Life of Zack and Cody alum smiled as he enjoyed the cool weather with Reinhart, who he started dating in July 2017. 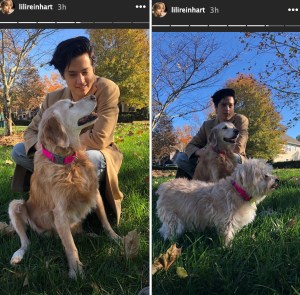 Although the Riverdale costars have played coy about their relationship, they made their red carpet debut as a couple in May at the Met Gala in New York City. But two months later, Reinhart told Harper’s Bazaar that she’s “not OK” publicly speaking about her love life.

Disney Stars Through the Years

However, the duo let their guards down in September while speaking to Glamour about each other. “Lili was a tough egg to crack. She’s very shy at first and reserved. And I think it was about halfway into the first season she started letting people in truly,” Sprouse said of his CW costar. “She’s one of those people that consistently pushes me to be better at the arts that I’m pursuing and that’s just the kind of person she is. She inspires excellence out of everybody she works with.”

Reinhart shared a similar sentiment about her beau, telling the magazine that the former Disney star “is one of the smartest — the smartest person — that I’m friends with. He’s incredibly passionate about art, about photography, about acting and I really admire that.”

However, she wasn’t always all about Sprouse. “I thought his voice was annoying,” Reinhart admitted. “I was like, ‘That guy’s got an annoying voice.’ And now it’s grown on me, I guess.”