Light heavyweight: Barrera dominates Smith, moves up in the rankings 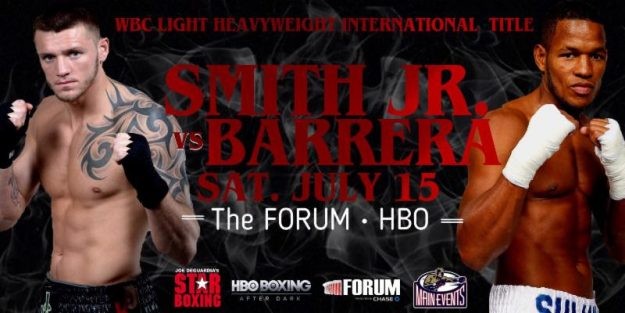 Check out my rankings within each division by clicking on the links below. If there is a lineal champion in the weight class he is ranked No. 1.

LIGHT HEAVYWEIGHT DIVISION (UP TO 175 POUNDS)

Quebec’s Stevenson’s has made eight successful defenses, including on June 3 when he pulverized Andrzej Fonfara, as expected, in a rematch of Stevenson’s hard-fought decision win in 2014. But Fonfara is not the same fighter now as he was then and Stevenson dropped him hard in the first round and nearly knocked him out before stopping him in the second round of an utter mismatch. Stevenson, the lineal champion who has nonetheless avoided the top challenges, is supposed to next face mandatory challenger Eleider “Storm” Alvarez (23-0), who won on the undercard.
Next: TBA

2. Andre Ward (32-0)
After easy wins in tune-up fights against Sullivan Barrera, former super middleweight world champion Ward challenged Sergey Kovalev for his three title belts in the best matchup of 2016 on Nov. 19. They put on an exciting fight, although there was a bit too much holding by Ward. But he survived a second-round knockdown to get back into the fight and won 114-113 across the board in a controversial result. Kovalev (30-1-1) quickly exercised his right to an immediate rematch and they met again on June 17, with Ward leaving no doubt this time in an eighth-round knockout win has he broke Kovalev mentally and physically.
Next: TBA

3. Sergey Kovalev (30-2-1)
Kovalev, a punching machine from Russia, put his three title belts on the line against former super middleweight champion Andre Ward in a terrific match in November and although Kovalev dropped him in the second round and dominated the first half of the fight, the judges awarded Ward a controversial decision with all three scoring the fight 114-113. The rematch on June 17 was another good, close fight until the eighth round, when Ward nearly dropped Kovalev with a right hand and then punished him to the body for a knockout victory.
Next: TBA

4. Nathan Cleverly (30-3)
In October 2016, Wales’ Cleverly challenged Juergen Braehmer on his German turf for a secondary world title and, in a good fight, won by stoppage seconds into the seventh round because Braehmer quit on his stool with a right elbow injury. It is the second world title Cleverly has won. Braehmer had the right to a rematch but has passed. Cleverly owes interim titlist Dmitry Bivol (11-0) a mandatory fight, but it’s not likely to be next.
Next: TBA

5. Juergen Braehmer (48-3)
Germany’s Braehmer made the seventh defense of his secondary title in October and it did not go as well as Nathan Cleverly stopped him in the seventh-round when Braehmer retired due to a right elbow injury. Brahmer had the contractual right to a rematch, but he passed and instead is moving down to super middleweight to be part of the eight-man World Boxing Super Series tournament that begins in September. He will face American Rob Brant (22-0) in the quarterfinals.
Next: TBA vs. Brant

6. Oleksandr Gvozdyk (13-0)
Gvozdyk, a 2012 Olympic bronze medalist for Ukraine who had around 250 amateur fights, has moved quickly since turning pro in 2014. In November, he made longtime contender and former world title challenger Isaac Chilemba to quit on his stool after the eighth round of a one-sided fight and in April he destroyed rugged Cuban contender Yunieski Gonzalez in the third round. He’ll be back to fight on ESPN against Craig Baker (17-1) in the co-feature of the Terence Crawford-Julius Indongo junior welterweight unification fight.
Next: Aug. 19 vs. Baker

7. Sullivan Barrera (20-1)
After losing a lopsided decision loss to Andre Ward in March 2016, Cuban defector Barrera bounced back to win three fights in a row, including on July 15 when he faced Joe Smith Jr. on HBO. After getting off the mat from a first-round knockdown, Barrera went on to dominate the rest of the fight in a unanimous 10-round decision victory.
Next: TBA

8. Artur Beterbiev (11-0)
Two-time Russian Olympian Beterbiev was due to meet Sullivan Barrera in a world title eliminator on April 21 in Barrera’s adopted hometown of Miami, in a fight that would have produced one of Andre Ward’s mandatory challengers. But Barrera, unhappy with the terms, withdrew. Beterbiev promoter Yvon Michel made a deal for the eliminator with Germany’s Enrico Koelling (23-1) and even though Beterbiev is in litigation trying to end his contract with Michel he plans to go through with the bout, even though the original date of July 29 is off and the bout is headed to a purse bid.
Next: TBA vs. Koelling

9. Eleider “Storm” Alvarez (23-0)
Alvarez, a 2008 Olympian from Colombia fighting out of Montreal, earned a mandatory shot against world champion (and fellow Montreal fighter) Adonis Stevenson by virtue of his close decision win against Isaac Chilemba in a November 2015 title eliminator, but the title fight has been repeatedly delayed, though Alvarez has stayed busy with four more wins, including against Montreal’s two biggest — but faded — boxing stars, a fifth-round knockout of former super middleweight titlist Lucian Bute in February and a decision against former champion Jean Pascal on June 3 on Stevenson’s undercard. The title fight is supposed to be next.
Next: TBA

10. Joe Smith Jr. (23-2)
In 2016, Smith, a construction worker by trade, scored two major upsets. First he drilled Andrzej Fonfara in the first round on his turf in Chicago, a victory that propelled him into a much bigger fight in December, when he was hand-picked as the opponent for the great Bernard Hopkins’ retirement fight. Smith struck again with an upset as he viciously knocked Hopkins out of the ring in an eighth-round knockout victory to send B-Hop into retirement with the first stoppage loss of his 28-year career. In his July 15 return, Smith scored a first-round knockdown against Sullivan Barrera but lost the rest of the fight in a clear decision, though he showed heart to battle through a broken jaw for most of the bout.
Next: TBA