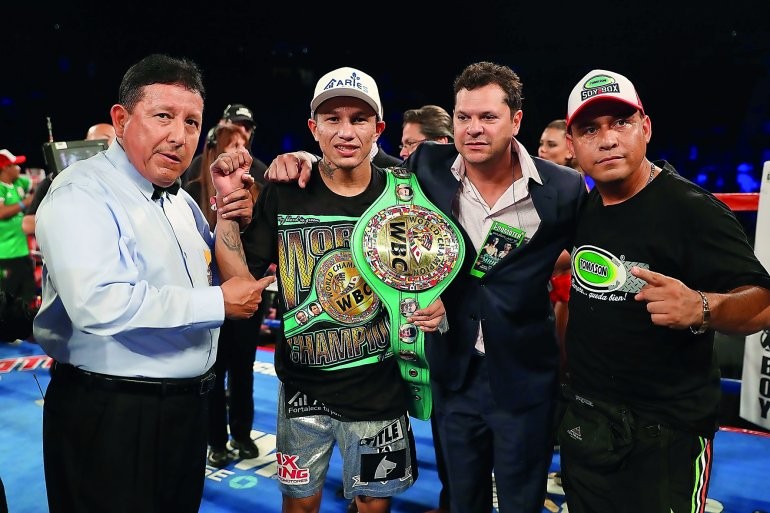 Miguel Berchelt controlled much of his bout with Takashi Miura, retaining his junior lightweight title.

Rafael’s remarks: Berchelt, 25, of Mexico, boxed a near-perfect fight to retain his world title for the first time in the HBO main event against hard-charging Miura, a hard-hitting 33-year-old southpaw from Japan. Miura, a former world titleholder, earned the mandatory fight by stopping Miguel “Mickey” Roman in the 12th-round on the same Jan. 28 card on which Berchelt took the title by a bloody 11th-round stoppage against Francisco Vargas. Many expected this to be an explosive fight, but that would have been bad for Berchelt, who used his boxing skills, movement and left hook to control Miura for virtually the entire fight.

He dropped Miura with a left hand behind the ear in the final seconds of the first round and did a superb job throughout the fight of avoiding Miura’s great left hand, which was his one chance to do damage. While Miura came close to landing it — and did connect with many to the body — he could never really connect with a big bomb to change the fight. While Berchelt is in a great position to face any of the top fighters in the division, Miura, 2-2 in his past four bouts (the other loss was a KO to Vargas in the 2015 fight of the year), seems to have had his time near the top of the division come to an end.

Rafael’s remarks: Corrales, a 26-year-old southpaw from Panama, made his American debut in his first fight since signing with Golden Boy Promotions earlier this year and had his hands full with upset specialist Castellanos, 35, of Mexico, who earned the shot with his latest upset, a shockingly one-sided seventh-round knockout of ex-featherweight titlist Yuriorkis Gamboa on May 5. It was competitive all the way. Castellanos dropped Corrales twice in the fourth round and Corrales scored one in the seventh round. But the fight came to a disappointing conclusion when a very bad accidental head-butt ripped open a horrific cut under Castellanos’ right eye in the 10th round, forcing referee Jerry Cantu to stop the bout on the ringside doctor’s advice and send it to the scorecards for a technical decision. A rematch is most definitely warranted.

Rafael’s remarks: Cuban defector Barrera, 35, of Miami, put on an excellent performance in a dominant victory Smith, the 27-year-old construction worker from New York’s Long Island. Smith was returning to the site of his greatest victory in December, when he knocked the great Bernard Hopkins out of the ring in the eighth round and sent him into retirement, but there was no magic on this night. After Smith dropped Barrera with a left hand to the head in the opening seconds of the fight, Barrera took over and won every moment of the fight thereafter. He was doing such a number on Smith that referee Jack Reiss went to Smith’s corner after the seventh round and considered stopping it. Overall, Barrera landed 126 more punches (187-61) than Smith, according to CompuBox. Barrera won his third fight in a row since a lopsided decision loss to Andre Ward 16 months ago. Smith went to the hospital after the fight to be treated for a broken jaw, which had been injured a week before the fight but may have been fractured in the early rounds.

Rafael’s remarks: Even after a 19-month layoff (mainly to deal with chronically injured hands) and fighting in a heavier division that usual, former lightweight titlist Figueroa, 27, of Weslaco, Texas, crushed the remnants of the faded Guerrero, 34, of Gilroy, California, in the main event of a Premier Boxing Champions card on Fox. Figueroa, armed with a sensational left uppercut, doled out by far the worst beating former featherweight and junior lightweight world titlist Guerrero, returning from an 11-month layoff, has ever taken in his career as he got knocked out for the first time.

The fight was expected to provide action and it did, but it was mostly one-way action as Figueroa dropped Guerrero five times in the headliner of the first card at the newly renovated Nassau Veterans Memorial Coliseum. Guerrero showed heart, but he is so badly faded he had no chance. Figueroa dropped Guerrero three times in the second round and then twice more in the third round, finishing him with a left hook to the body that sent him to his knees and caused referee Ron Lipton to end the carnage at 1 minute, 34 seconds. While Figueroa says he wants to move down to junior welterweight and look for a title, Guerrero should strongly consider retirement.

Rafael’s remarks: This result was as expected as Browne, 26, a 2012 U.S. Olympian from Staten Island, New York, absolutely blitzed his pal and former sparring partner Monaghan, 35, of Long Beach, New York. Browne had every advantage possible and shredded Monaghan, who was facing his best opponent. It was a blowout of epic proportions in front of Monaghan’s hometown fans. Browne, a southpaw, dropped Monaghan with a left hand 30 seconds into the fight and that was pretty much it. Monaghan made it to the second round but when Browne badly hurt him with a series of about a dozen unanswered punches, referee Steve Willis stopped it at 40 seconds. Browne is going places. Monaghan is probably not.

Rafael’s remarks: Kownacki, 28, a Polish fighter who grew up in Brooklyn, took a big step up by facing countryman Szpilka, 28, and passed the test with flying colors. In fact, Kownacki looked as good as he ever has shredding Szpilka, who suffered his second KO loss in a row. Szpilka was coming off an 18-month layoff since Deontay Wilder knocked him out cold in the ninth round of a January 2016 world title fight. With his hands at his side and horrible defense, Szpilka paid the price against Kownacki, who dominated the fight and dropped him in the fourth round before he slammed Szpilka with a pair of right hands that sent him sagging into the corner, where referee Arthur Mercante waved off the fight at 1 minute, 37 seconds. This was a big win for Kownacki, who announced his arrival on the heavyweight scene.

Rafael’s remarks: In his second fight since moving up to 168 pounds, Eubank, 27, of England, easily outclassed the statue-like Abraham, 37, of Germany, who once again failed to deliver in a major fight. After having serious problems making weight, Abraham, a former middleweight and super middleweight world titleholder, barely threw punches (as usual), stayed in a defensive shell and had no answers for Eubank’s speed and combination punching. That two judges found two rounds to give him was a surprise. Long after this fight was made, both fighters agreed the winner would become the final entrant into the World Boxing Super Series eight-man tournament that begins this fall. That slot will go to Eubank, who will open against Turkey’s Avni Yildirim (16-0, 10 KOs).

Rafael’s remarks: Selby, 30, of Wales, was supposed to make his mandatory defense against Barros, a 33-year-old former titleholder from Argentina, on Jan. 28 in Las Vegas on the Leo Santa Cruz-Carl Frampton II undercard only to see the bout called off at the weigh-in because Barros could not be licensed because of a positive hepatitis test. Selby stayed busy with a non-title victory in March and then finally met Barros in the rescheduled fight just four days after the death of his mother. But Selby stayed focused and put on an excellent display and outclassed Barros to retain his belt for the third time. Selby suffered a bloody gash over his right eye from an accidental head-butt in the fifth round, but dropped Barros with a left hook in the final round to put a nice cherry on top of a dominant victory that ended Barros’ seven-fight winning streak end.

Rafael’s remarks: CP Freshmart, 26, of Thailand, retained his 105-pound belt for the third time with a hard-fought win against mandatory challenger Loreto, 26, of the Philippines, who saw his seven-fight winning streak end. It was an action-packed fight in which Freshmart scored the lone knockdown with a right hand in the ninth round. By the end of the fight, both fighters showed the wear of a rough go, with Freshmart sporting a nearly closed right eye and Loreto’s face also showing bruising.

Rafael’s remarks: Known as “The Beast,” Baranchyk, 24, a Russia native fighting in his adopted hometown, hasn’t quite lived up to that reputation in recent fights, going the distance for the fourth fight in a row. But he was still good enough to roll past Smith, 26, of Philadelphia, in Showtime’s hard-hitting “ShoBox” main event. Baranchyk is a wild swinger and fun to watch but needs to refine his style as he steps up in class. Smith lost a point for holding in the fifth round and had no answers.