Keke Palmer: I Felt ‘Ambushed’ by Mike Johnson Asking Me Out 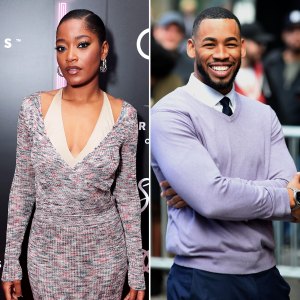 Mike Johnson will not be giving his final rose to Keke Palmer. The actress turned down the former Bachelorette contestant after he asked her out on Strahan, Sara and Keke earlier this week.

“Well, first of all, I get real spooked about entertainers or reality [stars] … I don’t know, it really scares me to date people in the industry. That’s No. 1,” Palmer explained on the Wednesday, October 16, episode of Good Morning America’s talk show. “No. 2, he asked me in front of everybody.”

After confirming that she would not be going out with Johnson, the former Nickelodeon star added that she felt “ambushed” by the situation.

The Bachelor After the Final Rose

Johnson’s love life became a topic of discussion for the three hosts when they asked about his romance with singer Demi Lovato, whom he previously confirmed he went on a date with.

“I made a mistake. I don’t like dating in public,” Johnson told Strahan, Haines and Palmer. “But if I were to ask you if we could go on a date in the public …”

After the segment made headlines, Johnson defended his decision to ask out Palmer via Twitter.

“For those with untrue assumptions… I’m grateful to be in your thoughts… 1. I deflected a question posed to me on my dating life – made a playful comment,” the reality TV personality tweeted on Tuesday, October 15. “2. I love black women too “3. Im happy, those are the vibes ??.”

Johnson also discussed his dating love an exclusive interview with Us Weekly.

“I was being playful [with Keke]. I flipped it around earlier today,” he told Us on Monday. “I was going to it. I was going to flip it on you, but I ain’t going to be like that. I’m being playful. Right? … She’s an eloquent woman. She’s a beautiful woman.”