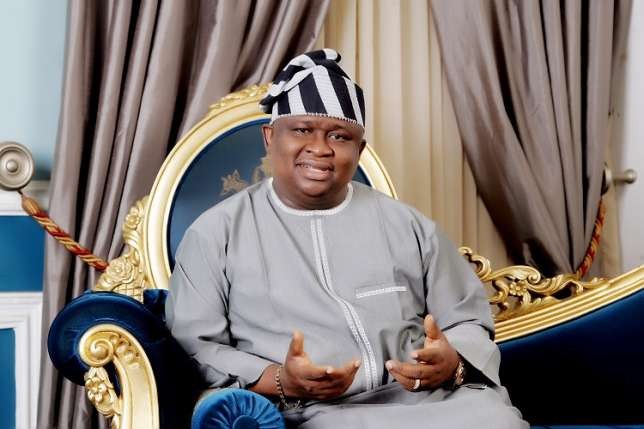 The Senator reportedly jumped out of the vehicle being used to convey him to an unknown destination.

Senator Olamilekan Adeola also known as Yayi has revealed that he was abducted by unknown gunmen at the National Assembly on Wednesday, April 18, but luckily escaped.

Some thugs who reportedly stormed NASS on Wednesday pushed him into a waiting SUV parked in front of the White House wing (the building housing the two chambers) and drove off.

The Senator representing Lagos west was said to have jumped out of the vehicle while in motion and sprained his ankle in the process.

It is, however, not clear if the kidnappers were the same gang that broke into the Senate and stole the mace.

According to an aide of the lawmaker, who spoke to journalists anonymously, Yayi’s attempted abduction may not be unconnected to his recent call for the sack of all service chiefs.

The lawmaker had on Tuesday asked President Muhammadu Buhari to relieve heads of all security agencies of their over the incessant killings across the country.

The aide said, “Yesterday at the floor of the plenary, senator Yayi Adeola, while lending his voice to the killings in Nasarawa he called for the sacking of all service chiefs and heads of security agencies.

“Today, before the mace was seized, Senator Yayi Adeola was actually kidnapped. Not attempted kidnapped by unknown gunmen at the national assembly right in front of the white house.

“They took him all the way to the house of reps – they were trying to escape through the villa gate it was at that point he had to maneuver and jumped out of the vehicle. As I speak to you, he still has a sprain on his leg.”

The Senator later recalled his narrow escape in a series of tweets on Wednesday.