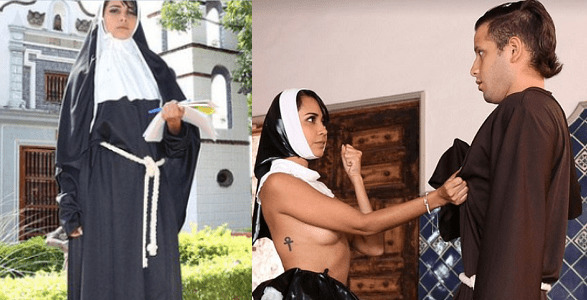 ‘Her beauty, her raw sexuality and her desire to share that with her fans is something that we knew was extremely special,’ McRae told AVN. ‘Her first scene with us showcases not only her passion and sexuality but also her faith, as we collaborated with her to come up with a convent-based theme. We have no doubt these scenes will make her a household name,’ he added.

Pineda’s original calling was to serve God as she entered a convent as a 10-year-old girl dreaming of becoming a nun.

She was quick to own up to the change in lifestyle which the then-18-year-old was experiencing and approached the sisters at the catholic convent with the sudden news that she would be separating herself.

The gamble paid off. The single mother now makes a little over $2,500 working 40 hours every 15 days as she dances, models and performs a range of sexual acts on herself in front of her fans.

Nevertheless, she hasn’t forgotten of her old roots that nearly led her to becoming a nun. She attends the weekly Sunday mass and participates in a weekly Friday night bible study class.