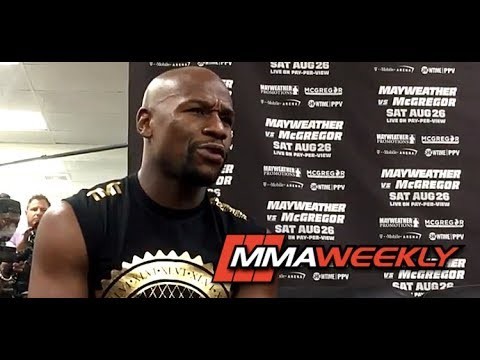 The Nevada State Athletic Commission is set to hear from the Floyd Mayweather and Conor McGregor camps at Wednesday’s monthly meeting, regarding the fighters’ request to allow them to wear 8-ounce gloves in their Aug. 26 bout at T-Mobile Arena in Las Vegas.

The fight, for which McGregor is crossing over from mixed martial arts to face Mayweather in a heavily hyped boxing match on Showtime PPV, is being contested at the junior middleweight limit of 154 pounds. Nevada rules state that boxers who weigh more than 147 pounds must wear 10-ounce gloves.

When both sides submitted official requests to wear 8-ounce gloves instead, commission executive director Bob Bennett said the panel would entertain the request at Wednesday’s meeting.

It’s a bad idea, however, according to the Association of Ringside Physicians, a nonprofit organization dedicated to the health and safety of boxers and mixed martial artists.

“The Association of Ringside Physicians understands that consideration is being given to amend current regulations, and in so doing, permit the use of 8 oz. gloves in the forthcoming boxing match between Floyd Mayweather and Conor McGregor,” Dr. Raymond M. Monsell, chairman of the ARP board of directors, wrote to the commission on Tuesday. A copy of the letter was obtained by ESPN.

“This is a bout that has already been set [at] a specified weight class,” Monsell continued. “Unless there is scientific evidence to support the view that such a change might improve the safety of this bout, we would strongly caution against allowing current regulations to be overruled. To do so would also set a precedent for future bouts.”

McGregor, who is used to wearing fingerless, 4-ounce gloves in his UFC bouts, said during the fighters’ international media tour last month that he wanted smaller gloves for their bout.

Mayweather said he would go along with it, writing on social media, “Don’t believe what you hear in the media. Don’t believe what you hear on blog sites. If it’s not coming directly from me, then it’s not true. I’m telling McGregor, ‘Let’s fight in 8 oz gloves.’ McGregor can fight in any brand he prefers or chooses. I’ll be wearing 8 oz. Grant gloves. Whatever advantage McGregor needs to feel more comfortable in the ring, I’m willing to accommodate. Let’s give the boxing and MMA fans what they want to see.”

Bennett told ESPN last week “the commission will hear both camps’ reasoning as to why it should deviate from its regulations during a scheduled meeting on Aug. 16. Our chairman Anthony Marnell will then lead a conversation with the other commission members and they will vote on it that day.”

Also at the commission meeting on Wednesday, the fighters will formally receive their boxing licenses, assuming there are no issues, and the referee and judges will be assigned to the scheduled 12-round bout.