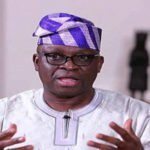 The Ekiti State Governor, Ayodele Fayose, has called on the President Muhammadu Buhari-led All Progressives Congress (APC) federal government to pay more attention to the menace Fulani herdsmen in the country, especially in Benue State, saying “what is going on in Benue State is more like an organised pogrom and those responsible for the killings in the State must be arrested and prosecuted.”

The governor said Acting President, Prof Yemi Osinbajo should be allowed to function as the president so as to be able to deploy instruments of the federal government to tackle the herdsmen menace, pointing out that; “As it is today, it appears that the Prof Osinbajo does not have the full powers of the president.”

In a release issued on Saturday by his Special Assistant on Public Communications and New Media, Lere Olayinka, Governor Fayose, who declared support for the new law prohibiting open grazing in Benue State, said “those opposed to the law are only doing so as part of their plot to undermine the land and people of Benue State and they must be made to face the law.”

He sympathised with the government and people of Benue State, adding that the Federal Government must stop playing ostrich to the menace of
the Fulani herdsmen.

Governor Fayose said; “Like I have maintained, cattle farming is not different from fish farming, snake farming, poultry farming, snail
farming, etc. Therefore, if fish farmers are providing their own ponds and poultry farmers building their own pens, while also buying feed for their animals, there is no reason cattle farmers should not also provide their own ranch and feed their cows without encroaching on
other people’s farmlands.”

“How can Nigerians embrace farming when those already in the farms are losing billions of naira worth of crops to destruction of their
farmlands by the Fulani Herdsmen and the Federal Government is not doing anything about it?”

He described the Buhari-led government’s continuous silence on the alleged killing of harmless Nigerians by Fulani herdsmen as unacceptable.