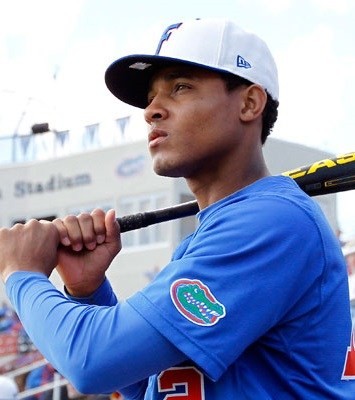 Following on the heels of Alex Hall’s Prospect Watch from last night, I just wanted to offer up a brief look at which of the A’s recent draft picks are playing for Vermont and the Arizona League A’s and how they’ve been performing so far in the early going. You can always stay up to date on all the A’s top prospects on my Athletics Farm site…

4th 3B Will Toffey (Vanderbilt)

The A’s second overall pick in this year’s draft, shortstop Kevin Merrell, has been hitting well with a .314/.324/.400 slash line and a pair of stolen bases while primarily batting out of the leadoff spot. 4th-round third baseman Will Toffey has shown good plate discipline. He’s already drawn 8 walks, but he also leads the team with 3 errors. 10th-round outfielder Jack Meggs, whose college statistics weren’t particularly eye-popping, has been one of Vermont’s best hitters. He leads the team with 2 home runs and 24 total bases and has put up an impressive .356/.383/.533 slash line. 11th-round infielder Ryan Gridley has been doing a great job of getting on-base and is currently boasting a .410 OBP. 12th-round first baseman Aaron Arruda leads the team with 5 extra-base hits, but his 14 strikeouts also lead the squad. Most of this year’s pitching picks have thrown a very limited number of innings, but 7th-round RHP Parker Dunshee has been the standout on the pitching staff, throwing 7 2/3 scoreless innings for Vermont. No other members of this year’s draft class have thrown more than 7 innings for the Lake Monsters, but 6th-round LHP Logan Salow has allowed just 1 unearned run while striking out 7 in 5 innings of work. And 6’9″ RHP Brian Howard recently made his pro debut by tossing 2 scoreless frames for Vermont. 2nd-round outfielder Greg Deichmann and 9th-round LHP Jared Poche, both out of LSU, were officially added to the Lake Monsters roster on Sunday but have yet to make their pro debuts.

This year’s top pick for the A’s, outfielder Austin Beck, hasn’t exactly gotten off to a blazing start, going 3 for 29 with just 1 walk and 15 strikeouts. 3rd-round shortstop Nick Allen has gotten into 5 games since signing and has put up a .294/.333/.412 slash line, while 5th-round catcher Santis Sanchez has gone 1 for 7. 18th-round outfielder Mickey McDonald leads the team with 6 stolen bases and is second on the squad with 13 hits and 18 total bases. 25th-round first baseman Hunter Hargrove has been hitting well with a .313/.389/.406 slash line. And 36th-round outfielder Logan Farrar has been a revelation early on, going 17 for 35 with 8 extra-base hits while sporting an impressive .486/.561/.800 slash line. Though, as an international free agent, he wasn’t actually a member of this year’s draft class, 18-year-old Cuban outfielder Lazaro Armenteros has put up a slash line of .278/.366/.389 with a home run, a double, 3 stolen bases, 3 walks and 14 strikeouts over his first 36 at-bats for the AZL A’s. Meanwhile, on the mound, 32nd-round RHP Caleb Evans and 28th-round LHP Pat Krall have been the pitching standouts thus far. Evans has struck out 10 over 8 1/3 scoreless innings, while Krall has put up a 2.35 ERA and a 0.91 WHIP over his first 4 appearances for the A’s.