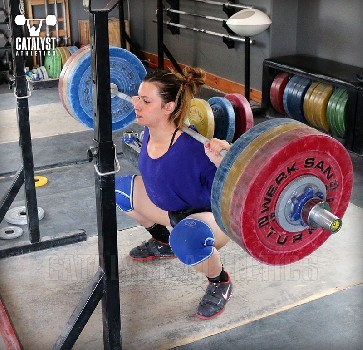 I’m comfortable saying it’s common knowledge that keeping the bar as close to the body as possible during the snatch and clean is one of the most important factors in successful lift technique, but it may be an equally common problem for learning lifters (and even a lot of more experienced lifters). There is a very real struggle in figuring out how to maximize aggression in the lift while maintaining this proximity—even conceptually for many athletes the two things seem impossible to reconcile.

A million things can be said on the topic, and you may have heard most of them at one point or another, so I’m not going to write a complete treatise on it. Instead, I want to cover what I see as being the three most common causes of the bar moving away from the body in the snatch and clean, and what to do about them.


Forward Imbalance in the Pull

Often with the issue of the bar swinging away, we get overly focused on the part of the lift where we notice the distance, which is reasonable, but it leaves out one of the major causes of this problem—being out of balance early in the pull.

A critical part of the pull from the floor is establishing the proper balance over the foot (slightly behind mid-foot) as well as the initial bar path (slightly toward the lifter). If the bar starts over the balls of the foot, which is what we would consider correct, if it moves directly vertically, the combined bar-lifter system is out of balance forward—the bar does not have to actually move forward for you to be out of balance here, so if it does in fact move forward, the imbalance is even more pronounced.

To work on this, you can use pulling variations with pauses between the floor and the knee, any pull or lift variation that uses an intentionally slowed first pull, or any lift variation with a pause or pauses on the way up. In each case, the idea is to give you more time and opportunity to feel the imbalance and make the correction, as well as to spend time in the proper positions in order to strengthen them so that the correct motion becomes more natural. Another option is a complex of pull or deadlift + snatch or clean—the pull or deadlift is more easily controlled, so you have a chance to feel the proper motion and then transfer it into the subsequent lift.


Bumping the Bar Off the Hips/Thighs

There are quite a few possible causes of this cause itself, but I’ll focus on the two primary ones—excessive distance prior to the bar-body contact, and excessive hip extension and/or inadequate leg extension.

The farther the bar is from the body before it comes into contact at the top of the pull (hips for the snatch and upper thigh for the clean), the greater the horizontal force of that contact will be; in contrast, the closer the bar is to the body leading into this contact, the less horizontal force it will received. I like Ursula Garza’s analogy of “skipping” a tennis ball on the ground—if you throw it from a height with a sharp downward angle, the ball will bounce back up at that same angle and high off the ground; if instead you lean way down and throw it at the shallowest angle you can, like you’re trying to skip a rock, it will bounce off the ground but remain very close to it afterward.

I consider leg extension inadequate and/or hip extension excessive when the hips cross forward through an imaginary vertical line running through the lifter’s ankle, hip and shoulder when viewing them standing in profile. In other words, the lifter pushes the hips too far through the bar instead of bringing the hips and bar together so they can both move up.

Use exercises like pulls, high-pulls, and muscle snatches/cleans to practice guiding the bar properly up the body by driving properly with the legs and achieving contact at the top in a way that helps the bar continue moving upward as much as possible and minimizes the forward motion.

Finally, in an effort to prevent bending the arms early in the pull, oftentimes lifters will lock their elbows. This makes sense, and will definitely keep the arms from bending early, but it creates a new problem in the third pull—it makes it far more difficult to keep the bar close when pulling under.

If the arms are stiffly extended, when you reach complete extension, the only place the bar is able to go is forward—swinging around the shoulder joint. Even if you actively bend the arms to pull under the bar, it will be delayed and the outward bar path already established.

The arms should be straight because they’re relaxed and being pulled by the weight of the bar, not because you’re actively extending them. If your elbows bend a little bit naturally when you pull, you’ll be OK—this is better than locked elbows in every meaningful way.

Use pulls with straps so you can relax your grip as much as possible to get a sense of what it feels like to keep a tight back and loose arms, and of course, the easiest way to fix the problem of locking your elbows? Quit locking your elbows.