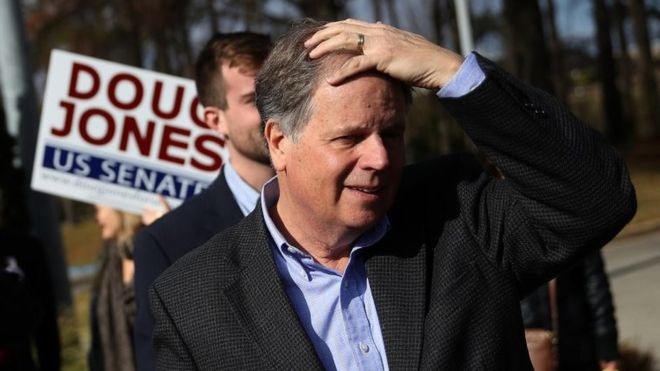 Doug Jones has become the first Democrat in 25 years to win a US Senate seat for Alabama after a bitter campaign against Republican Roy Moore.

The 63-year-old former prosecutor’s victory deals a blow to Republicans, narrowing their majority to 51-49 in the Senate.

The election took a twist when Mr Moore became embroiled in allegations of sexual misconduct with teenage girls.

Mr Moore, who was backed by President Donald Trump, denies the claims.

“This entire race has been about dignity and respect,” he said in his victory speech.

He wins the seat vacated by US Attorney General Jeff Sessions.

Mr Moore, a firebrand conservative who was twice removed from the state Supreme Court, has said that homosexual activity should be illegal and argued against removing segregationist language from the state constitution.

But it was allegations of sexual misconduct made by several women, some when they were teenagers, that drew national attention to the special election.

The claims against Mr Moore came amid a wave of allegations of sexual misconduct against prominent figures that has led to the resignation of three politicians.

Politics Democrats are setting themselves up perfectly to pummel Republicans on sexual harassment in 2018
Why Trump is still winning
Photos: Lagos Police Commissioner leads task force to visit Apapa-Kirikiri traffic gridlock
Trump all but endorses Roy Moore
Buhari President visits his farm in Daura ahead of France trip (Photos)
Haley on Trump accusers: ‘We should all be willing to listen to them’
why sexual harassment training fails
Franken ’embarrassed and ashamed’ over groping allegations
Photo: President Buhari pardons 500 prison inmates in Kano
Kevin Spacey faces new allegations of sexual assault
‘My husband tied me to tree’
Trump trades ‘short and fat’ barb with N Korea’s Kim
Trump US lawmakers deny Democrat’s bid to impeach President
Christianity on Sex What does the Bible actually say about premarital sex? We look at nine bible verses concerning sexual relations before marriage.
Swiss prosecutors rule out charges in new Polanski rape claim
Russian jet makes ‘unsafe’ intercept of US Navy aircraft
Why Zimbabwe has a ‘Minister of WhatsApp’