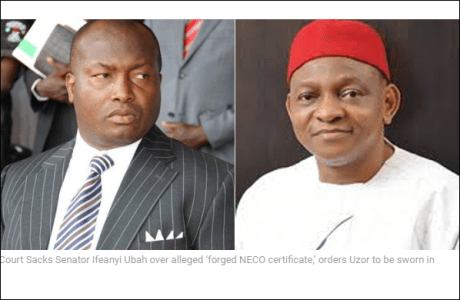 The court aslo ordered the Independent National Electoral Commission (INEC) to issue the certificate of return to Obinna Uzoh, as the Senator-Elect for the district.

Justice Bello Kawu made this order in his judgment on Monday, December 16, 2019, following a suit filed by Obinna Uzoh of the People’s Democratic Party (PDP).

Mr Uzoh in his suit, also insisted that YPP should be disqualified for not conducting the primary elections for its party for the Anambra South Senatorial election.

In his judgement, Justice Bello Kawu dismissed Ifeanyi Ubah, and declared that the 2nd defendant, Young Progressive Party (YPP), did not have the locus standi and should not have participated in the February general election for Anambra South Senatorial Zone.

He also declared that the 4th defendant, Dr. Obinna Uzoh, is the actual winner of the February general election having become the second position in the general election, and having the 1st and 2nd defendants disqualified for non-compliance with the provisions of the Constitution of the Federal Republic of Nigeria, 1999 (As amended) and the Electoral Act, 2010 (As amended).

Justice Bello Kawu, therefore, ordered the 3rd defendant, Independent National Electoral Commission (INEC) to issue Certificate of Return to the 4th defendant, Dr. Obinna Uzoh, within 48 hours, as the duly elected Senator for Anambra South Senatorial District, being the candidate of the Peoples Democratic Party (PDP) and having scored the highest number of valid votes cast.

He also ordered the Senate President and the Clerk to the National Assembly to swear in Dr. Obinna Uzoh as the Senator of the Federal Republic of Nigeria representing Anambra South Senatorial District within 48 hours