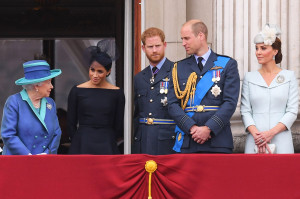 Her Majesty demands it! Queen Elizabeth II has high standards for the royal family and, as such, keeps her brood in line with an assortment of strict rules.

The monarch, 93, forbids Prince William, Duchess Kate, Prince Harry, Duchess Meghan and her other relatives from saying certain words in her presence, according to Harper’s Bazaar. Examples include “toilet,” “couch” and “perfume.” The royals are instead expected to use “lavatory,” “sofa” and “scent.”

The queen also prefers to exclude wedges from the family’s wardrobe. That has not stopped the duchesses from wearing the style of shoe beyond her watchful eye, though. In fact, Meghan, 38, sported some trendy ones during her official visit to South Africa with Harry, 35, and son Archie, 5 months, in September.

The ruler is also against calling members of the family by abbreviated versions of their names. For instance, Kate, 37, must be referred to by her full title: Catherine, Duchess of Cambridge.

All the Endearing Nicknames of the Royal Family

The queen receives final approval on wedding dresses, meaning Meghan’s Givenchy gown from her May 2018 nuptials and Kate’s Alexander McQueen sheath from her April 2011 ceremony were run by Elizabeth before the big days.

In addition to the aforementioned rules, the queen is staunchly against garlic, so the ingredient will not be found in any food served to her, and she insists that women in the family keep their nails natural-looking. Only pale pink or clear polish will do.

Despite the policies, Elizabeth takes pride in her loved ones. “She’s seeing a more mature, responsible side of Harry, and she’s really impressed with how Meghan’s upped her game,” a source told Us Weekly exclusively earlier this month.

The same can be said for her relationship with the Duchess of Cambridge. “Kate and the queen have always had a special bond, but they developed a deeper friendship after she and William moved from Anmer Hall, Norfolk, to Kensington Palace, which is within walking distance of Buckingham Palace,” an insider revealed in April. “Sometimes they’ll casually catch up over afternoon tea. But other times, they’ll have more formal meetings, where the queen will give intense one-on-one training about taking on the crown.”

Watch the video above to learn more about the royal family’s rules!