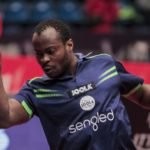 A confident ITTF Africa Champion, Aruna Quadri  has arrived India in readiness for the lucrative Ultimate Table Tennis League which serves off on July 13.

Listed at No.29 on the recently issued Men’s World Rankings, he is one of the illustrious names that appear on the team sheets for the forthcoming Ultimate Table Tennis to be staged in India from Thursday 13th July to Sunday 30th July.

Having listed in the Oilmax Stag Yood team, Quadri has a teammate in Panagiotis Gionis of Greece as the second male foreign player in the team while the foreign female players in the team are Hong Kong’s Doo Hoi Kem and Russia’s Polina Mikhailova in the team owns by Vivek Kohli.

“I am so excited being selected as one of the 12 male foreign players in the maiden international table tennis league in India. My selection as the only black and African player means a lot to me and it is a rare opportunity for me to play alongside some of the best players in the world. There is no doubt that it is going to be a tough challenge to me but I am ready to give my best as usual to justify my selection as well as surpass all expectations in the championships,” he said.

He added: “Playing with some of the top players is like playing in the top European league particularly playing against players with different style and pattern. I believe this league will help me to improve my tactics and I am hopeful of a good outing for my team with an experienced player like Panagiotis Gionis. With the quality of players, the league is as strong as any top European league and I know it is going to be tough. I look forward to a fantastic tournament and also enjoy myself in a different atmosphere,” Quadri said.

The Ultimate League is the first ever professional table tennis league to be held in India, the concept comprises six franchises and will be staged in three cities. The contest starts on July 13 and concludes on July 30.The venue for the kickoff contest is the Jawaharlal Nehru Indoor Stadium and the finale to be held in Mumbai.