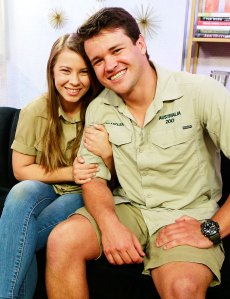 A wedding that’s all their own! Bindi Irwin and her fiancé, Chandler Powell, have ideas in mind for their upcoming nuptials that involves the inclusion of khaki.

“We are definitely going to incorporate khaki,” Powell, 22, told Us Weekly exclusively on Friday, September 27.

Irwin, meanwhile, spoke about the chances of her wearing a khaki dress on the pair’s big day. “People keep asking if I’m going to wear a khaki wedding dress. I’m not sure,” Irwin, 21, said. “I’m not sure whether I’m going to take it to that extreme. Maybe some subtle hints of khaki.”

Though the level of khaki inclusion in the young couple’s ceremony is yet to be determined, Powell confirmed that “there will definitely be animals” at their wedding next year because “it’s at [the] Australia Zoo, so we have to involve all of our families.”

“It’ll be really special,” Irwin continued. “We’ll walk down the aisle with koalas. It’ll be great!”

The Australia Zoo holds significance to the couple, as it’s the site of their romantic proposal and where they first crossed paths. “[Her brother] Robert [Irwin] and I went to a location in the zoo and planned out the perfect spot where he would be completely hidden, but still make an amazing photo,” the wakeboarder explained to Us.

“After [Irwin and I] got dressed up, I said, ‘You know, it’s been a hectic day. Let’s go for a walk through the gardens and just take a minute for ourselves before we take a bunch of photos,’” Powell explained. “We’re walking through the zoo and I got to the spot where Robert and I lined out with sticks so I knew where to be. We marked it out. We walk in, I’m looking on the ground. We found the spot with the sticks and I got down on one knee, and it was just the perfect moment.”

Irwin, the daughter of late Crocodile Hunter star Steve Irwin, and Powell announced their engagement via Instagram in July after nearly six years of dating. The special moment commenced on the wildlife conservationist’s birthday.

“We shared the entire story of the proposal, and what’s really special is we got to commemorate it with a koala release. I’ve never released a koala before,” Powell said. “So we had an injured koala that came into the wildlife hospital at Australia Zoo, and she actually had a joey in her pouch, too. We actually got to release two koalas together and it’ll be a really special.”

Irwin, meanwhile, teased that their wedding could air on a potential third season of their reality TV show. “I think this would make a really cool exclusive for, Crikey! It’s the Irwins! when there’s a season three, if there’s a season three,” she said. “I think it would be a lot of fun to be able to take everybody behind the scenes and share our experience. It is so special that it’s not just our wedding, but it’s kind of the celebration of our lives at Australia Zoo.”

With reporting by Christina Garibaldi

These celebs have matching tattoos. Here’s why

The lovey names Mariah Carey has for her estranged siblings

This is What Lil Wayne really thinks about Chanel West Coast

Why Did Normani and Camila Cabello don’t get along Well