This story on Trump’s Russia paranoia is terrifying

(CNN)The Washington Post published a breathtaking piece this week detailing the depth and breadth of President Donald Trump’s blind spot on Russia. The story is, in a word, terrifying.

Trump, as revealed in scrupulous detail in the article, simply does not believe the unanimous conclusion of the US intelligence community: That Russia purposely sought to interfere in the 2016 election to help his candidacy and hurt the bid of Hillary Clinton.
Trump’s refusal to acknowledge that fact is, according to sources in the Post story, entirely attributable to the fact that he believes doing so would somehow invalidate or weaken his victory and his presidency.
This paragraph — up high in the Post story — is a stunner:
“The result is without obvious parallel in US history, a situation in which the personal insecurities of the president — and his refusal to accept what even many in his administration regard as objective reality — have impaired the government’s response to a national security threat. The repercussions radiate across the government.”
Stop. Go back. Read that paragraph again. What it says is this: Trump’s insecurity about the nature of his victory (and who should get the credit for it) has made it impossible for the broader government and foreign policy apparatus to properly address the threat posed by Russia.
The ways in which Trump’s insecurities have trickled down to how Russia is dealt with by his administration include, according to sources cited in the Post story:
There’s much — much! — more in the story, but it’s all to the same basic point: Trump’s obsession with proving that he won fair and square means that he cannot admit that Russia actively aimed to meddle in the election. And his refusal to admit that objective fact has created a series of dangerous ripple effects in the country.
What’s terrifying about that willful blind spot is that every single person in a position to know has been unequivocal about the fact that Russia views its 2016 interference as a massive success and predicted that the country will be back in 2018 and 2020 with even more sophisticated meddling efforts.
“It’s not a Republican thing or Democratic thing — it really is an American thing,” former FBI Director James Comey said of the Russia threat in testimony before the Senate Intelligence Committee in June. “They’re going to come for whatever party they choose to try and work on behalf of. And they’re not devoted to either, in my experience. They’re just about their own advantage. And they will be back.”
In July, former Director of National Intelligence said that the Russians are “prepping the battlefield” for the 2018 election.
Facing that future interference from an adversarial foreign power, the US is hamstrung to prepare and deal with it because, well, the president wants all the credit for having won last year.
There are lots of abnormal traits of this White House and this president. Some of that is to be expected given the campaign he ran and the promise he made to shake things up in Washington. Others, like his approach to Russia, are not just abnormal, but dangerous to his presidency and the country at large. 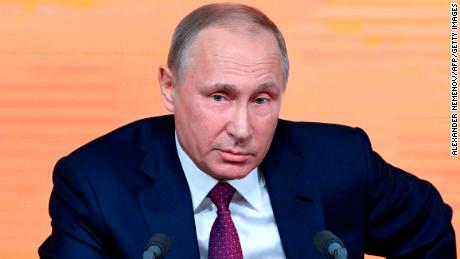 Putin praises Trump, slams Russia probe 02:33
Perhaps most unnerving is the fact that no one — inside the Administration or out — believes anything will change in Trump’s approach to Russia. In fact, Trump called Putin on Thursday after the Russian leader’s year-end press conference.
“He said very nice things about what I have done for this country in terms of the economy, but he said also some negative things in terms of what is going on elsewhere,” Trump said on Friday morning. “The primary point was to talk about North Korea.”
Share
Facebook
Twitter
WhatsApp
Pinterest
Linkedin
ReddIt
Email
Print
Tumblr
Telegram
Mix
VK
Digg
LINE
Viber
Naver
Previous articlePhotos: Reigning African footballer of the year Asisat Oshoala meets Tony Elumelu in Lagos
Next article“$1b To Fight Boko Haram, Failure of APC” – PDP…Says F.G Should Apologize To Nigerians Over False Claims