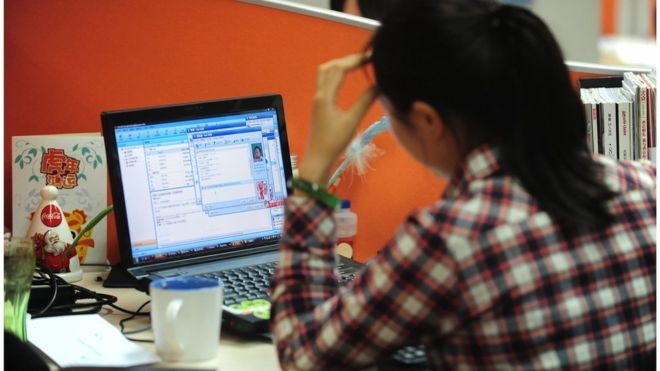 Sexist recruitment practices had contributed to a decrease in the proportion of women working, HRW said.

Tech giants and government agencies had published “male only” adverts, as well as others asking women applicants to be “trim” and “aesthetically pleasing”.

Alibaba said it would “conduct stricter reviews”, and Tencent apologised.

Alibaba, an e-commerce giant, was accused of repeatedly using the lure of attractive female co-workers in its recruitment campaigns, using the phrases “Ali beauties” and “goddesses” to describe them on social media.

HRW found that the adverts reflected “traditional and deeply discriminatory views” that women are less capable than men and that they will not be committed to their jobs because of their stereotypical role as family caregivers.

“Our track record of not just hiring but promoting women in leadership positions speaks for itself,” an Alibaba spokesperson told the BBC on Monday.

It pointed to the fact that one-third of its founders and managers were women, but said it would be stricter in ensuring “compliance with our policy” of providing “equal opportunity regardless of gender”.

Tencent told the BBC that the practices highlighted in the report “do not reflect our values”.

“We are sorry they occurred and we will take swift action to ensure they do not happen again,” a statement said.

A Baidu spokesperson said, according to CNN: “We value the important work that our female employees do across the organisation, and deeply regret the instances where our job postings did not align with Baidu’s values.”

They also said that the company had identified and removed offending job postings before the release of the HRW report.

Huawei, one of the world’s largest smartphone makers, said it would review the allegations and work to ensure its recruitment materials are “fully sensitive of gender equality”.

The 99-page report analysed more than 36,000 job advertisements posted between 2013 and 2018 on Chinese recruitment and company websites and on social media platforms.