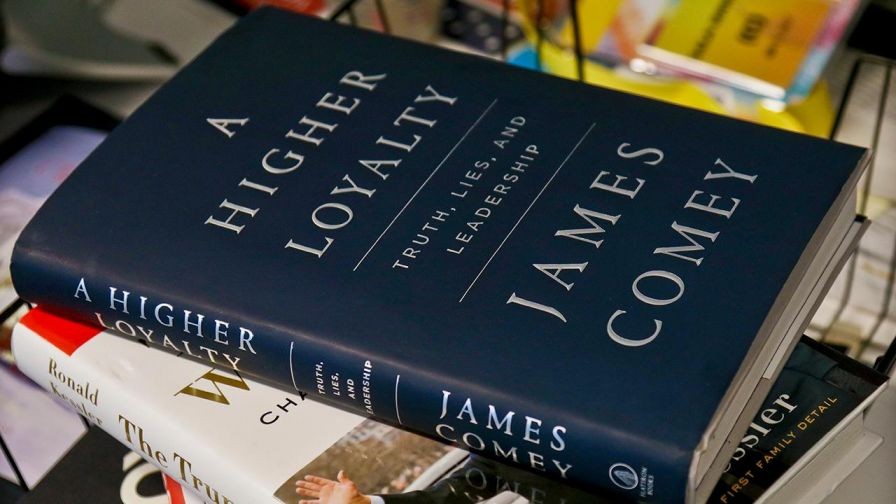 In his first interview since being fired, former FBI Director James Comey described President Trump as an ego-driven liar who treats women like “meat” and is “morally unfit to be president.”

Ahead of the interview, Trump fired off a series of tweets calling the country’s former top cop a “slimeball,” a liar and directly refuted claims he asked Comey for his loyalty.

During Sunday’s televised interview, Comey also weighed in on the salacious – and unverified – Russian dossier, as well as his reason for going public about the probe into Hillary Clinton’s private email server in the final days of the 2016 election.

Clinton- as well as a large number of Democrats – have blamed her November defeat on Comey’s actions.

“I hope not – but the honest answer is, it wouldn’t have changed the way I think about it,” Comey said. He added he hoped people would read his book “A Higher Loyalty” and put themselves in his shoes. Comey claimed he wasn’t trying to favor one candidate over the other but instead tried to do “the right thing,” though he admitted his decision was influenced by the assumption Clinton would beat Trump in the election.

“I don’t remember spelling it out, but it had to have been, that she’s going to be elected president and if I hide this from the American people, she’ll be illegitimate the moment she’s elected, the moment this comes out,” he told Stephanopoulos.

Comey, though, seemed to be aware of the weight of his action.

“I walked around vaguely sick to my stomach, feeling beaten down,” he said. “I felt like I was totally alone, that everybody hated me. And that there wasn’t a way out because it really was the right thing to do.”

Comey also recounted his initial interactions with Trump over the unverified 35-page Russian dossier that was compiled by former British Intelligence officer Christopher Steele and funded in part by the Democratic National Committee and Clinton’s campaign. The dossier detailed a graphic account of Trump with Russian prostitutes during a 2013 trip to Moscow.

“I’m about to meet with a person who doesn’t know me, who’s just been elected president of the United States… from my watching him during the … campaign could be volatile,” Comey said. “And I’m about to talk to him about allegations that he was involved with prostitutes in Moscow and that the Russians taped it and have leverage over him.”

Comey claimed during a Jan. 27, 2017 private dinner meeting, Trump asked him to disprove the allegations in the dossier. “He said, you know, ‘If there’s even a 1 percent chance my wife thinks that’s true, that’s terrible.”

Comey added, “‘I remember thinking, ‘How could your wife think there’s a 1 percent chance you were with prostitutes peeing on each other in Moscow?’ I’m a flawed human being, but there is literally zero chance that my wife would think that was true. So, what kind of marriage to what kind of man does your wife think [that] there’s only a 99 percent chance you didn’t do that?”

Comey said Trump told him, “I may order you to investigate that.”

He allegedly advised the president to “be careful about that because it might create a narrative that we’re investigating you personally, and second, it’s very difficult to prove something didn’t happen.”

Comey’s interview with Stephanopoulos is part of a big media blitz designed to promote his book.

In released excerpts, Comey compares Trump to a mafia boss and questions why the president initially refused to acknowledge Russia meddled in the 2016 presidential election. He also takes aim at Trump’s physical appearance, describing him as “slightly orange, with bright white half-moons under his eyes where I assumed he placed small tanning goggles.”

The White House has worked hard in recent weeks to discredit Comey.

Trump tweeted Sunday that Comey was the “WORST FBI Director in history, by far!,” suggested he should be behind bars and referred to him as “a man who always ends up badly and out of whack (he is not smart!).”

In 1996, Comey served as assistant U.S. Attorney for the Eastern District of Virginia during President Bill Clinton’s administration. In 2002, he was named U.S. Attorney for the Southern District of New York under President George W. Bush. In that role, he secured high-profile convictions including one against Martha Stewart for securities fraud, conspiracy and obstruction of justice.

A decade later, Comey was appointed by President Barack Obama and confirmed 93-1 by the Senate as FBI director.

“This is nothing more than a poorly executed PR stunt by Comey to desperately rehabilitate his tattered reputation and enrich his own bank account by peddling a book that belongs in the bargain bin of the fiction section,” she said.