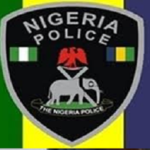 Two persons suspected to have robbed an East bound luxury bus at the Ogbere (Ogun State) stretch of the Sagamu-Ore Expressway, were shot dead by men of the  Anti-robbery squad attached to the Ogebere-Ijebu Divisional Police Headquarters, Ogun State.

Their suspects’ remains were dumped at the premises of the Ogbere Police station along with  the three Pump Action rifles, two local pistols and a machete recovered from them.

Also, the sum of N166, 000:00k, handsets, laptop, wristwatches and other valuables snatched from the victims were recovered by the Police.

The 34 passenger bus on the fleet of  the Chisco Investment company and marked Lagos AAA 649 XN, was said to have been attacked by the robbers around 1.a.m, who broke the windshields of the bus, forced their way in and evicted the driver before commandeering it into the bush.

It was gathered that the robbers first used an 18 seater bus to block the access way of the luxury bus, compelled the driver to pull – up and used their weapons to smash their way into it.

A victim, Donatus Adie, told journalists that the bus took off at  Jibowu in Lagos enroute Aba-Owerri-Port-Harcourt, and that it was when they got to the J4 area of Ogbere around 1.08.a.m that the  robbers struck and dispossessed the passengers of their valuables.

He said for over two hours the operation lasted, victims were held in terror by the robbers and that even after the suspects had vanished into the bush, the fear – stricken victims stay put in the bush until police rescue team arrived.

Also, Kunle Apanishile, who said the suspects snatched N30,000 and wristwatch from him, added that he was beaten by them.

The Police Public Relations Officer in Ogun State, Abimbola Oyeyemi, told journalists that the police got a tip off that a bus carrying passengers had been hijacked and attacked  at the J4 Junction, prompting the DPO of Ogbere division, Agunbiade Adeyinka and  his team to storm  the area.

Abimbola said although, the robbers had left the scene when the Police arrived but they traced them to their hide – out in a bush, where two of them  were shot dead while one other escaped with gunshot wound.

The Police Image maker revealed that the sum of N166, 000 was recovered from the robbers, and said it would be shared among the victims.