Nicki Minaj’s ex, Safaree has reacted to her attempt to break the internet today with a very raunchy cover for Paper Magazine’s Winter 2017 issue. Safaree who has been feuding with Nicki since their bad break up, posted the photo on his page and wrote;

“Can we please figure something out … these are the kind of pictures I always wanted you to take for me.. Wow” 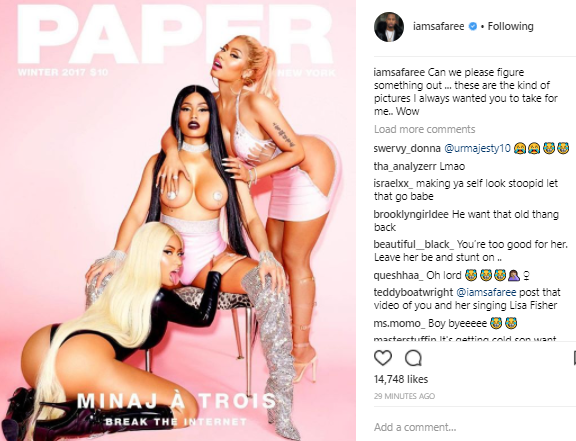 Dencia Why she is comfortable in her own skin

A lot of has been said about Dencia but she doesn’t really care what you think about her.

When you think of Dencia, the word ‘controversy’ pops into your head.

Over the years, headlines have portrayed the buxom beauty as an Internet savage who takes no mercy. Perception is one thing and reality is another.

“I am not controversial. I am actually a very quiet person” she tells Pulse during an exclusive interview. Dencia blames the press for only reporting one side of most stories she is involved in.

“The media will tell you that ‘oh Dencia did this’ but they don’t tell you why Dencia did that thing. Somebody will attack me and when I respond they never put the attack. They just put what I said to make me look bad. The media is not going to tell you I am at Harvard University”  states Dencia. Her philanthropic efforts have also gone below the radar of the media.

She doesn’t take the bad publicity personally. Being the shrewd businesswoman she is, Dencia sees the controversies as being good for her. “I can’t be mad because it has worked so far for me” she boasts.

The wait has to do with a few personal challenges and the growth of her skin care line. Stripped of big guest acts, Dencia claims “it is one of the greatest albums made by a female African artist of my generation.” This Dencia for you, a woman who has a huge ego.

And why doesn’t she have big names on her album? “I don’t like to beg people” she states bluntly. You see, Dencia has a singular vision- a laser-like focus on herself. She could care less about what goes on around her.

Dencia doesn’t hold back too. She thinks the lack of unity among women is the reason why female music acts aren’t making much progress in the industry.

“I feel like in Africa we have this hate towards one another where people think that if you uplift the next person it’s going to affect you. It doesn’t. That’s the mentality. It is a screwed up mentality. Everything women see is hate and envy…You guys are the ones preaching feminism…but sis where is the feminist movement in the industry though” she says without batting an eyelid.

When asked about sexual harassment in Nigeria, Dencia said “Why do you think I was not out here doing stuff. I wanted to make money because I wanted to pay money through my career. It’s serious. I just felt like I was sexually harassed the other day by people that were not even…it was just horrible. I just felt disgusted.

“It is in every industry and it is just horrible. Men keep your ding ding to yourselves.”

She, however, recognizes that there are women who offer themselves to men in the industry as a way to get ahead. “If a woman is offering you and pushing up on you because she wants to get ahead, fine. Let her use her vagina and get her way through life but don’t push up on people who don’t want it.”

As for the criticisms about her skin care brand she doesn’t care. She is not fazed by other people’s opinions.

Raised by her grandparents gave Dencia the confidence not to be hurt by words. “I was raised by my grandfather and he was a military judge, a general in the army. So I was raised very straight. I’m a realist I was raised very spoilt and I was always told you speak the truth and keep it pushing. I didn’t have to ever sugar coat anything” she reveals.

Now a woman, she still holds on to this attitude. “There is no word on earth strong enough to make you bad about yourself” was one of the gems.

The half Cameroonian-half Nigerian singer prefers to stay indoors in her home in Los Angeles. “I spend like 99.9% of my time in my room” Dencia reveals. “I’m a realist and a thinker. I spend a lot of time with myself. I try to figure out how I can change the world” she adds.

No matter how low key she wants to be she is in the news. In October 2016, it was reported by The Sun that Manchester United star Paul Pogba and Dencia were romantically linked.

Dencia declines to talk on this. She says people should focus more on Pogba’s skills. She thinks he has what it takes to win Ballon d’Or one day.

ARAMIDE: Why I admire Alicia Keys
My romance with Jeff Akoh was for publicity, Bisola confesses
G-Eazy – The Plan
Why Nigerians are willing to die to get to italy
I watched several videos of Quadri, says Japanese star
Tizeti partners Facebook to bring Nigerians affordable internet service The Express Wi-fi plans are affordable and range from N50 for 100MB to N2,000 for 10GB.
LISTEN/DOWNLOAD: Jeff Akoh – Lokoja [ALBUM]
In Vietnam Death toll from typhoon rises to 61 The death toll from typhoon downpours and floods wreaking havoc along Vietnam’s south-central coast has risen to 61, an official said Tuesday, as the country opens its doors to world leaders for this week’s APEC summit.
House Passes Children’s Health Bill, Sending Measure to Senate
At least 20 people shot as gunman opens fires during church service n Texas
Tiwa Savage Singer says God saw her through the trying times of her marriageTiwa Savage Singer says God saw her through the trying times of her marriage
Ladies spark outrage after dressing up as nuns in bikinis (photos)
Ric Hassani – Believe
Dear Uriel, I love your ‘booby’ – Ruggedman
Mr 2kay – Pray For Me
Big Black Woman poses in skimpy lingerie for her 35th birthday and social media users go hard on her
When my father was sick, Bianca chose not to take care of him, rather she pleased herself’ – Ojukwu’s first son, Emeka Jnr speaks
2 men arrested for murder of 26 Nigerian girls, women killed in In Italy sea
Wiz Khalifa – No Dirt