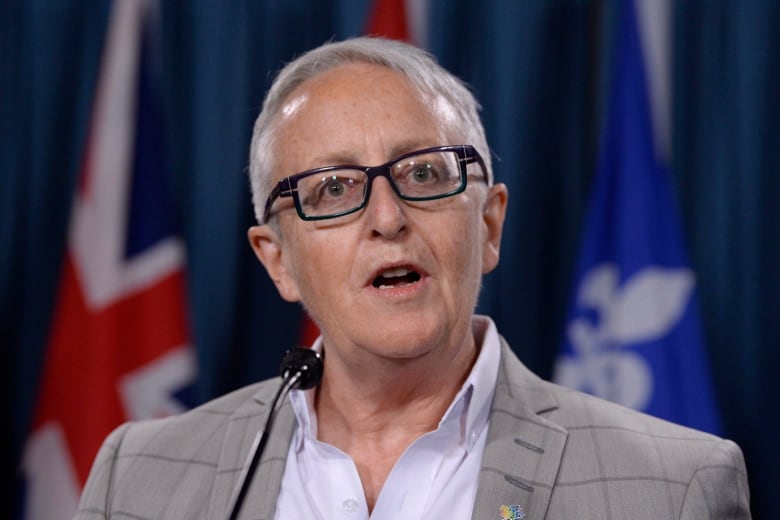 The CEO of the Canadian Museum for Human Rights is gone after three weeks of controversy surrounding the national institution, but former employees say more action needs to be taken to effect real change.

And a national LGBT advocacy group says so much harm has been done, it now wants the museum to remove its stories on display.

Kennedy said she wants the Winnipeg museum to replace a same-sex marriage display with an explanation of how it sometimes forced staff not to show LGBT content — and in some cases deliberately hid it.

“We believed in them. This is the highest institution for human rights in this country and they betrayed us, they betrayed our stories,” she said.

“People gave their personal stories and their personal information on the understanding that it would be available for public view. It wasn’t. It was hidden. We were shamed and that cannot be allowed to continue.”

The museum’s president and CEO, John Young, stepped down Thursday night following allegations that staff were forced to censor LGBT content for at least two years, as well as claims from current and former staff of racism and sexual harassment at the  institution.

His departure came after five women told CBC that the museum’s human resources department dismissed their complaints of sexual harassment by a male colleague and two weeks after former employees started sharing stories of alleged racism inside the CMHR.

“These allegations were not properly escalated to the board of trustees. We should have been made aware of these incidents, and it is unfortunate that we were not,” board chair Pauline Rafferty wrote in an internal email to all staff on Thursday.

In February, Young said in an interview that he wanted to continue his role as CEO, but after allegations from staff began to emerge, he said last week that he would leave at the end of his term in August.

But in a statement announcing his departure, Rafferty said both Young and the board “agreed that it is in the best interest of the museum that he step down, effective immediately.”

Former program assistant Liam Green said that should only be the first step. He said systemic discrimination against people of colour inside the museum needs to be addressed.

Green, who is gay, said he struggled to speak up when he knew his colleagues were being forced to censor content.

“I was also in situations where I felt that my voice as an employee and as a queer person were not being taken seriously.”

Former employee Thiané Diop started the #cmhrstoplying hashtag three weeks ago and has been watching developments around the museum carefully.

“Part of me feels finally validated in a way that I didn’t for years,” she said Friday, in reaction to the CEO’s departure.

“I’m watching and waiting. I’m not jumping up and down or excited quite yet, but I’m interested to see how this continues to develop.”

The union representing about 160 employees at the national museum is calling for accountability beyond Young, and it wants an onsite counsellor hired whom staff can turn to.

“We know that there are managers and executives still within the museum that were responsible to make decisions to not address some of the harassment complaints,” said Marianne Hladun, the Public Service Alliance of Canada’s Prairie Region executive vice-president.

The museum’s board of trustees says it’s created a new diversity and inclusion committee. It has also promised to launch an institution-wide review of the museum and its policies once a Winnipeg lawyer finishes her investigation into discrimination allegations.

The board issued an apology to staff, donors, volunteers and members of the community in its statement Thursday.

Rafferty has taken over Young’s role until a new CEO can be found. The CEO of the Crown corporation is appointed by the federal government.