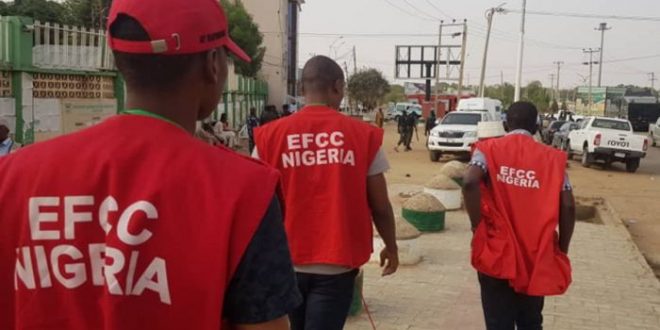 The suspect identified as Kelechi Nwaturuocha was arraigned by the anti-graft agency before Justice Darius Khobo of State High Court Kaduna on a two count charge bordering on impersonation and Cheating.

It was further learnt that Kelechi disguised as a lady and l*sbian with the name Donna Walshak in 2019 on social media platform.

According to reports, he used the fake identity to defraud his victim, Vanessa Rose, who sent him Steam Cards worth $1900 which he converted to cash by selling same on the internet.

Investigation revealed that the money from his victim was “wired” to him through the accounts of two Nigerian ladies domiciled in two new generation banks.

Count one of the charges reads,

“that you, Nwaturuocha Linjunior Kelechi sometime in 2019 at Kaduna within the jurisdiction of this Honourable Court did fraudulently induce one Vanessa Rose, an American citizen living in the United States of America to deliver an aggregate sum of one thousand nine hundred United States Dollars ($1900) through steam cards to you, which you converted to naira in the sum of three hundred and eighty thousand Naira (N380,000), which he would not have done but for your deceit, by misrepresenting yourself as one Donna Roberts Walshak to her on Facebook and Gmail hangout social media and you thereby committed an offence contrary to and punishable under Section 142(1) of the Kaduna State Penal Code Law No.5 of 2017″.

The suspect, however, pleaded not guilty to the charges against him.

Consequently, the prosecuting counsel E.K Garba urged the court to fix a date for the hearing of the case while the defence counsel E.A Audu asked for the bail of the defendant.

In his ruling, the presiding Judge after listening to the ensued legal fireworks, fixed January 20, 2020, for hearing of the bail application and commencement of trial and, ordered to remand the defendant in the Nigerian Correctional Centre, Kaduna.

The post EFCC arrests man for defrauding victim by pretending to be a lady and a lesbian appeared first on Within Nigeria.